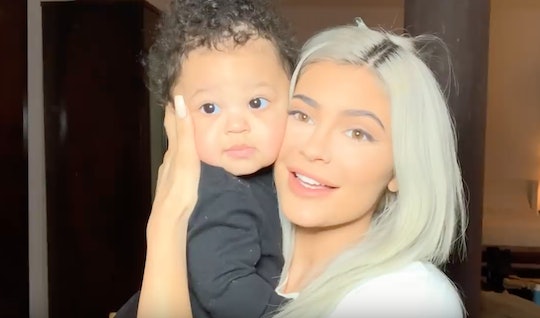 This year has brought a lot of "firsts" to Kylie Jenner and her little family with rapper, Travis Scott. After welcoming their first child, Stormi Webster, in February, they are now experiencing new milestones almost each and every day. And they celebrated another milestone this weekend. On Saturday, Kylie Jenner celebrated Stormi's first snow and the little girl could not be any cuter. Seriously.

Stormi is seeing the world thanks to her parents bringing her on tour with them. Currently her dad, Scott, is on tour for his recent album, Astroworld, which means that Stormi is already seeing a majority of the United States that most people don't even dream of seeing, let alone at 10 months old. And because Stormi is not just limited to living in her hometown in Southern California, it means she is getting to experience the weather in other parts of the nation. And this weekend, Stormi got to play in the snow for the first time ever (or, at least, for the first time that Jenner documented it).

During a recent Astroworld tour stop in Minneapolis, Minnesota, Stormi got to experience snow for the first time ever alongside her parents, according to E! News. And Jenner was able to document this on Instagram. In the photos, shared to Jenner's account, Stormi and Jenner are exact twins in their matching grey sweatsuits and pink and red hats.

The combination is absolutely perfect — even if Stormi seems to be not happy to be on the receiving end of her mom's cuddles and kisses. "She loves my kisses, I promise," Jenner wrote in the caption of the photo.

Although the cold weather might be a first for Stormi, it's clear that she is more than prepared to handle the elements. In another photo, posted to Jenner's Instagram account, Stormi can be seen hanging out in the inside of a private plane (like most 10-month-olds, of course), wearing the cutest and fluffiest pink snow suit and matching hat.

It's the most perfect, coziest outfit that anyone would be so envious of — seriously, even I could use a snowsuit that warm right now.

And commenters on Instagram can not get enough of how adorable (and grown up) the little girl looks. "How do you handle this cuteness?," one commenter asked. There is no answer to that question — it's impossible to know.

From private planes to experiencing her first snow while on tour, Stormi is clearly loving her life while on the road. During two recent vlogs, posted to Jenner's channel, Jenner revealed that Stormi gets her own hotel room on tour to run around in and play in (incredible) since she is always on the road with her mom and dad, according to E! News. Not to mention, Jenner shared that Stormi also gets her own room backstage complete with snacks, toys, and a flatscreen TV so she can watch her dad perform without having to deal with the crazy crowds in the concert.

Because her dad has introduced her to the "good life," it makes sense that Jenner has captured Stormi saying "Dada" on camera multiple times, according to Cosmopolitan. Bottom line: Stormi is clearly a big fan of his (for a good reason) — and Scott just wants what is best for his daughter. "I keep Stormi on the road, she's got her own dressing room vibe, got her own bus vibe," Scott told E! News last month. And now she has her own "snowsuit vibe" after her recent trip to Minnesota.

While Stormi might be a California girl at heart, she clearly knows how to rock a snowsuit and brave the cold weather in style.