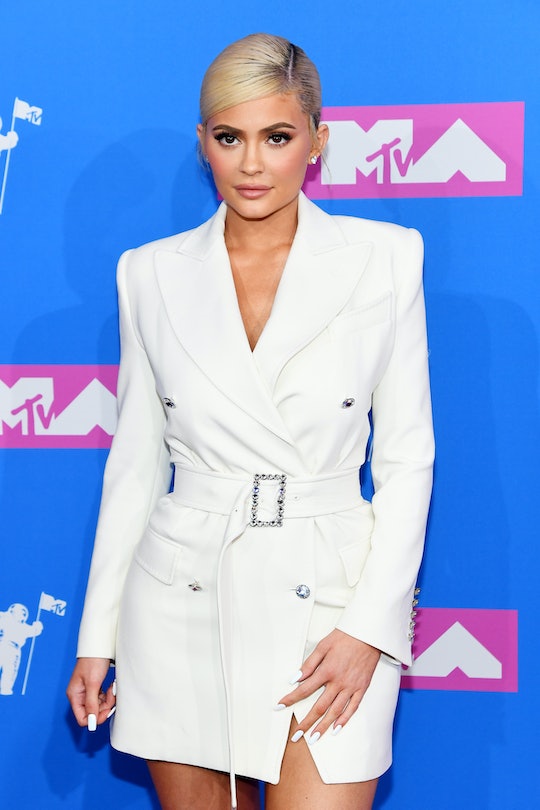 The Kardashian-Jenners are basically experts at this point when it comes to throwing lavish celebrations, so it's no surprise at all that their annual Christmas party looked absolutely incredible. This year, Kim Kardashian took over hosting duties from matriarch Kris Jenner, and threw an elaborate Christmas Eve bash, but thanks to the recent baby boom the family experienced, there were definitely some other changes this year as well. For one, new mom Kylie Jenner left the Kardashian Christmas party early, according to People, despite it basically looking like the ultimate night out. But in a sweet post on Instagram, the makeup mogul explained that, as fun as the party may have been, she really didn't mind bowing out early to be with her baby girl.

Kylie and her 10-month-old daughter, Stormi, dressed in coordinating sparkly outfits for the event, and posed for photos at the party with Khloé and her own 8-month-old daughter, True, who had opted for coordinating snowflake-themed looks. It also looked like quite the good time — Kim and Kanye's "winter wonderland" themed party included a backyard full of snow, and a performance by John Legend, according to the Daily Mail.

But as far as Kylie was concerned, her infant daughter's schedule was still the number one priority.

The youngest KarJenner posted a slightly blurry shot of herself and Stormi on her Instagram Story from the end of the night, and wrote, "this is me leaving the party early to go give my baby a bath (while wearing this dress because I couldn't get it off by myself)." But just in case anyone felt bad that she had to miss out on any late-night party fun, Kylie set the record straight, and wrote, "it was the best xmas eve yet."

If you're a new mom, or if you've ever had a young infant, then chances are actually pretty good that you know *exactly* how Kylie felt. Even though kids can totally put a damper on otherwise-fun plans thanks to their early bedtimes and the fact that skipping out on the nightly routine usually means you'll be paying for it big time the next day, it's also pretty special to get to celebrate your first Christmas with your little one — even if it means going home early to give them a bath.

In fact, from the looks of it, Kylie was so psyched about spending Christmas with Stormi that she even opted to give her one of her presents a few days early. Two days before Christmas, Kylie posted a photo of a Louis Vuitton-themed children's mini Lamborghini on her Instagram Story, along with the caption, "like mother, like daughter," according to ELLE.

Still, as much as Kylie may not have been into the idea of throwing Stormi off her routine, judging from photos from the party, according to E! News, it actually looked pretty kid-friendly. For one, there was the fact that the snow meant the kids could literally go sledding in their California backyard, while photos from Khloé's Instagram Story showed off the party's designated kids' area, complete with a churro machine, and mini gingerbread houses and bowls of candy to use as decorations.

Being a parent isn't always easy or fun, and sometimes you just want to have some alone time to go to a Christmas party and let your hair down — especially if it's an epic bash hosted by Kim and Kanye. But, this year, Kylie was clearly all about embracing her daughter's first-ever Christmas Eve, and it sounds like there really wasn't anything she'd rather have done than leaving early to put her little girl to bed.