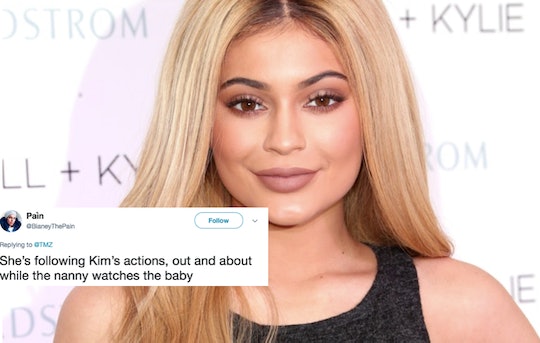 Kylie Jenner Is Getting Shamed For Going Out After Giving Birth To Stormi & Ugh, Really Guys?

It's hard to deny that new motherhood is a life-changing experience. Your body has just expelled a tiny human — and while you're still trying to recover from that physical feat, you're expected to care for a newborn who relies on you for literally everything. It. Is. Exhausting. And for many moms, it can be an incredibly isolating experience. Still, our society expects new mothers to shoulder the bulk of this burden. And god forbid, she steps out without her baby before the "acceptable" amount of time postpartum. (Oh, the horror!) Well, Kylie Jenner is getting shamed for going out after giving birth to baby Stormi, and people seriously need to CTFD.

As we've all probably heard by now, Jenner finally confirmed that she was, indeed, pregnant all of this time. In fact, she delivered a baby girl on Feb. 1, as People reported. And somehow, the Lip Kit mogul managed to do it with an impressive amount of privacy. Now that Jenner is a verified mother, it seems paparazzi have been extra diligent in documenting every time she sets food outside her home.

On Feb. 11, the reality star was spotted in public for the first time since giving birth, TMZ reported. And most recently, the new mama was photographed during her second post-pregnancy outing (alongside her best friend Jordyn Woods) while heading to a friend's baby shower, as E! News reported. Paparazzi caught the pair out grabbing some Starbucks before the event, as well. And *gasp* Jenner was without her baby again.

Let's just say, online critics had a lot to say about this.

"Probably never see that baby around her, she'll always be with nannies," one Facebook user commented.

Another person chimed in with, "Leaving the baby already wow."

Yet another Facebook user commented, "Obviously she wants attention again. Already being raised by nannies. Sad."

"Shouldn’t she be taking care of her baby?" another person wrote.

A Twitter user also shared their two cents on the fact that Jenner wasn't at home with her newborn daughter. "She's following Kim's actions, out and about while the nanny watches the baby."

Ah, yes. Just like her older sister Kim Kardashian, Kylie Jenner is being mom-shamed for daring to leave her home after welcoming a new baby. When will the madness end?

Thankfully, a few voices of reasons have come through to defend the new mom. One person pointed out that baby Stormi has a father (remember Travis Scott?) who is perfectly capable of caring for his daughter.

"To the people fussing over the baby not being with her. You know the baby has a father right?" the Facebook user commented "Like, dads can parent their children while mom takes a break for a few hours. and every new parent (dads included) deserve (and should absolutely take) a break while they adjust to this new phase of life."

Another person pointed out that taking baby Stormi out in public at this point would be pretty overwhelming (and potentially risky) considering the lurking paparazzi.

"I wouldn't like to take my baby out in the public if I was this famous!" one Facebook user wrote. "She is way too young for this, paparazzi are crazy and they don't care for the well-being of the child they will do anything to get that photo!!"

You have to admit, this is some pretty solid reasoning.

I mean, Jenner was out grabbing coffee — a new mom staple — and heading off to a baby shower for her friend. It's not like she was spotted out clubbing less than two weeks after giving birth. Sheeesh, folks. And so what if Jenner has the help of a nannies at her disposal? Newsflash: They're highly-qualified people who do this for a living. Besides, grandma Kris Jenner could have very well been getting in her daily dose of baby snuggles while the new mom was out. Or, maybe Travis Scott was holding down the fort.

So can we please stop making assumptions about Kylie Jenner's parenting based on a few photos of her doing normal things without her newborn baby in tow? Because being a new mom is hard enough as it is.