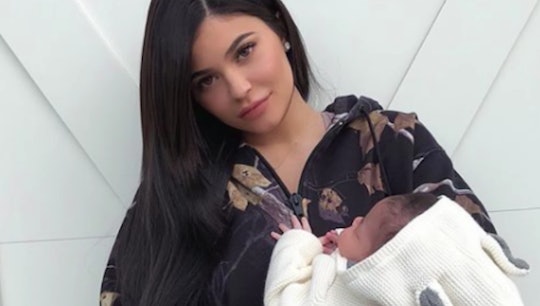 Kylie Jenner Is Getting Shamed For Having Long Fingernails & It's Ridiculous

As of March 1, Kylie Jenner and Travis Scott's baby girl, Stormi, is officially 1 month old. (Already! Can you believe it?) During these past four weeks or so, the new parents have undoubtedly experienced huge changes in their lives. I mean, caring for a tiny human is utterly exhausting, after all — no matter how famous you are or aren't. Even though Jenner and Scott have continued to shy away from public appearances for the most part, critics have still managed to find ways to nitpick at their parenting decisions. In fact, Kylie Jenner is getting shamed for having long fingernails, and it's completely ridiculous.

On baby Stormi's one-month "birthday," the Kylie Cosmetics mogul took to Instagram to mark the occasion — by sharing a couple of photos of herself cradling her newborn daughter, E! Online reported. "My angel baby is 1 month old today," Jenner captioned the mother-daughter images. Adorable, right? (Answer: Yes.) Except, this is the internet we're talking about; so it's pretty much a guarantee that someone will find something to complain about. And apparently, there were plenty of naysayers who mommy-shamed Jenner for her long fingernails in the photos, Us Weekly reported. Because of course they did.

As it turns out, plenty of Twitter users were concerned about how in the heck the new mama safely cares for baby Stormi with those long, glamorous nails. "I really wanna know how Kylie Jenner changes a diaper w her nails that long...." one Twitter user wrote.

Another person tweeted, "How the eff does @KylieJenner wear such long nails with a new born? I can't even go long without scratching my own face!"

To be fair, I'd like to see the mama in action with her amazing nails, too. Just so I can take notes.

So it started off innocently enough — with people merely wondering about the logistics of having crazy-long nails and a newborn. Except it didn't stop there. Because a fair amount of Twitter users saw Jenner's nails as concrete proof that she isn't a legitimate caregiver for her daughter. "That baby is just another accessory for her. She has long nails because she has nannies to do all the work," one person tweeted. Another Twitter user chimed in with, "That’s what all the nannies are for! To do that for her!" Oh no, they didn't.

Still, there were some Twitter users who pointed out that Kylie is still perfectly capable of caring for her daughter — long nails or not. "She has long fingernails not a disability," one person in the know pointed out. "People who have long nails (like me) adjust and get used to doing ‘normal’ things, shock horror! ... You can wear gloves, you hold a wipe/cotton wool and take care, you don’t use bare hands." Another person tweeted, "I didnt know that there was a universal maternal nail rule. I need to apologize to my boys asap."

I'm thankful for the voices of reason in the midst of all of this Kylie bashing. Because having long nails has absolutely nothing to do with how involved a person is as a parent — and quite frankly, neither does hiring a nanny. A source close to family told People in February that, while Jenner has been a great mother to baby Stormi so far, she has enlisted the help of professional caregivers. Which makes sense, considering she's a working mom in charge of a huge makeup empire and all. “With the support and abilities she has to hire nannies and assistants, she’s been a really, really great mom. She’s incredibly doting and hands-on as a mom. She’s always been very maternal.” And surprise, surprise: People were quick to shame Jenner for hiring nannies, too.

My question is this: Are working women not allowed to continue working after they have a baby? What century are we in again? *Eye roll* What about Travis Scott? Why is no one shaming him for carrying on with his career in music? Oh right, I forgot. It's 2018, and yet a parental double standard still exists.

People, can we please give Kylie Jenner a break, here? Because newsflash: She's an actual person. She's also a new mother. And having a newborn is hard enough as it is — without having complete strangers making assumptions about your parenting based on the length of your fingernails.