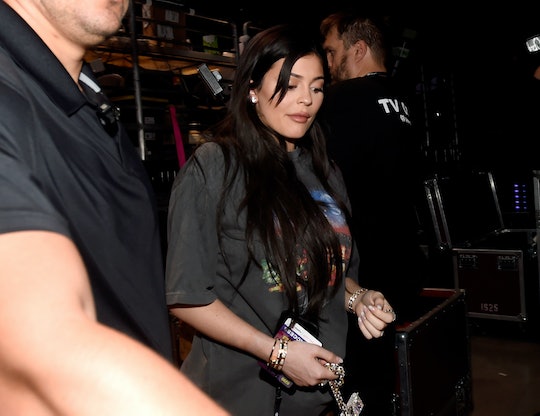 Kylie Jenner has been active on social media lately, promoting her lip line and sending cute Snapchats over the weekend with her mom, Kris Jenner. But, one thing the reality star hasn't been putting online? You might have noticed, but Jenner isn't showing much of her stomach on social media recently and her followers have basically been begging for her to. Many comments on her Instagram photos and tweets about Jenner indicate that fans are kind of pissed that she might be holding out on some sweet, sweet pics of her rumored pregnancy bump. But guess what? Jenner doesn't owe anybody pictures of her midsection. If she wants to lay low on matters concerning her reported pregnancy, that's totally her prerogative.

Back in September, TMZ reported that 20-year-old Jenner was expecting a baby with boyfriend Travis Scott. (Romper has reached out to Jenner and Scott's reps for comment, but has not heard back at this time.) But, since then, the internet has gone crazy with speculation, and Jenner herself has played coy. She still hasn't officially confirmed or even addressed the news, and she's carefully curated her social media posts to avoid showing her stomach in full.

Many of her followers are not happy. They've started demanding a bump pic like they're lost in the desert, and a photo of Jenner's stomach is the glass of ice water that can save them from shriveling into dust and bone. A quick scan of social media makes it seem that Jenner is a modern-day Marie Antoinette, meeting desperate demands for bump nourishment with a flippant, "Let them eat Kylie Cosmetics."

But guys. It's just a stomach, and she doesn't have to show it off if she doesn't want to.

Sure, Jenner has built her brand through giving her fans lots and lots of access to her personal life up until now. It's not entirely surprising that, after engaging with all her social media and buying all of her products, some fans have begun to feel entitled to all the latest details about her life.

People get obsessed with keeping up with all the KarJenner gossip. And for some of Jenner's followers, there seems to be a certain mindset of, I helped make you famous on the understanding that you'd share all the drama you were going through, and this is the biggest drama of all. So, hey, pay up, and stop posting confusing pictures of you in baggy shirts, dammit!!

But Jenner didn't sign a contract with all her followers saying that she would always tell them (or show them) everything they wanted to know. And things can change when suddenly you realize that you have another life you're responsible for protecting, should these rumors be true.

Every parent has to make his or her own decisions about how much they feel comfortable sharing about their children on social media. And if Jenner is indeed expecting, she might want to keep this one life-changing thing private, at least for the moment. Let's not forget, too, that Jenner was thrust into the spotlight when she was incredibly young. The awareness of how that has shaped her could absolutely be playing into her decision-making right now.

Or sure, maybe, as some fans seem to think, she's just trying to keep the conversation going, and build up the anticipation as long as she possibly can, so that when she finally does post a bump picture, the internet explodes in a fiery ball of excitement and heart emoji. If that is the case, then why play into it? Go check out someone else's social media instead. Or hey, take some time to watch the new season of Stranger Things, or keep up with the latest insane drama going on in our political system. Maybe she'll have posted a bump picture by the time you get back, or maybe not. Either way, it's her decision to make.

There's something immensely icky about demanding access to part of a woman's body. Just because Jenner is famous doesn't mean that her fans have the right to see something that — at least for the moment, until these rumors are addressed — she might like to keep to herself.