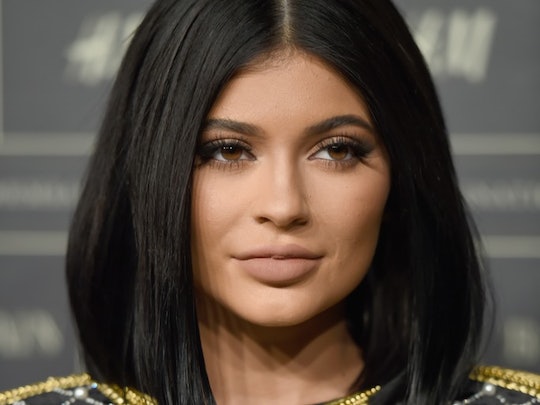 Kylie Jenner May Leave Instagram One Day For A Surprising Reason

She may have one of the biggest Instagram followings, but the youngest Jenner isn't interested in perpetual internet fame. During an interview with Elle UK, Kylie Jenner said she'll quit Instagram when she becomes a mom. It's probably a disappointment to her 46.5 million Instagram followers, but hopefully she won't be closing her account anytime soon.

Jenner told Elle UK, "Once I have a kid I’m not going to be on Instagram. You know, I’ll probably delete my Instagram and just… I don’t know, live life." It's a challenge for Jenner to distance herself from life in the public eye. Teen Vogue reported that in 2015, Jenner earned more than one billion likes on her Instagram photos (1,057,803,339 at last count). To put that into perspective, she posted less than 1,000 pictures this year. Though there are plenty of young women who would love that kind of internet influence, Jenner seems to be feeling the pressure of life on camera. During the same interview with Elle UK, Jenner described her ideal life at 95 years old:

I would love to have a family and build a home with a farm in Malibu Canyon and just have my kids and throw away my phone, and just really, like, live my life and not do this anymore.

Through her Instagram, followers also get a glimpse at what she's up to with her famous fam. The below photo is captioned, "Like mother like daughter."

And seriously, who doesn't love cute snapshots like this?

But while Jenner's pictures often look a lot like those of a normal teen, she's been in the spotlight for a long time. According to IMDb, she made her debut on Keeping Up with the Kardashians in 2007. Since then, she's appeared in 133 episodes and counting. That early exposure led to serious pressure. In June, Hollywood Life reported that Jenner used Snapchat to share how deeply bullying affected her from a young age: "I've been bullied since I've been nine...from the whole world, it feels like sometimes," she said.

She went on to say that she's tried her best to handle it with grace, but that her heart goes out to anyone else dealing with bullying. In her words, "the only opinion that really matters is yours." In September, Jenner took her message to a different platform. According to Hollywood Life, Jenner posted to Instagram to honor anti-bullying activist Lizzie Velasquez while sharing a bit about her own experience. She wrote that the tough criticism she deals with causes her to "breakdown, hide and cry." To her, it's "unacceptable" to be a bully.

Jenner works to maintain a strong public image, but her confessions about the darker side of celebrity make her desire to lead a quiet life understandable — especially since she knows the effects that fame can have on young people who are constantly exposed to it. For now, though, there are still more Instagram posts on the way.