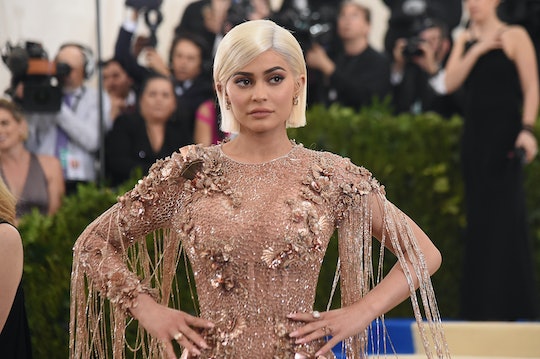 Fans Have Some Truly *Wild* Theories About Kylie Jenner's Pregnancy

On Friday, Kylie Jenner stopped the world when reports were released that she was reportedly pregnant. People/fans/users of the internet, obviously, freaked out, became shook, had to take a knee, grab their inhaler, etc., because this really was huge news. The youngest Jenner is reportedly pregnant with her first child with boyfriend (of five months) Travis Scott. Just take it in. And once you catch your breath, we need to talk about the Kylie Jenner pregnancy theories that the internet has concocted up, because they're truly wild and you need to see them.

Because the internet has an Opinion on everything, it only took about .2 seconds for theories to round up about Kylie's reported pregnancy. The reality star hasn't even confirmed the news (neither have her or Scott's reps, either), and people are basically submitting their theories, assumptions, and dissertations about the pregnancy into the Library of Congress.

Some of the theories that have been stirred up by the web are sexist (naturally), some are a little lofty, and others are just useful information for fans to know. So, without further ado, I present to you the wonderful world of Kylie Jenner pregnancy theories, brought to you by the internet.

While this is a very ~cute~ theory (who wouldn't want to think that Kim and Kylie are so close that Kylie would volunteer to carry Kim and Kanye's third child), it's very unlikely it is true. TMZ reported in early September that the surrogate that is reportedly carrying Kim Kardashian's third child (a girl!) is a black woman in her 20s who is married and has two kids. Jenner doesn't check a few of those boxes.

This theory is just awful. Kylie Jenner didn't trap anyone with a pregnancy. It takes two to tango and Travis Scott, at 25, should know that. Plus, Scott is reportedly thrilled by the news that he'll be a father, so let's just drop this theory in the garbage can where it belongs.

Kylie Is Due This Winter

This is less of a theory and more of a *rainbow* The More You Know. According to CNN, Jenner is due in February, which is just about five months after the news broke.

This one is a real doozy. According to Doomsday writer David Meade, the world was *supposed* to end tomorrow, Saturday Sept. 22. One Twitter user claims this could be a plan to distract us, courtesy of the Illuminati. Unfortunately, Meade is calling take-backs on this theory, as Fox News reports, saying that the world will not end on Saturday. So, next!

I think Twitter user Karizzle is on to something — maybe this isn't the end of the world, but this could just be a distraction from all of the "real issues" happening around us. Wouldn't be the worst thing to happen.

And Finally... Kylie Jenner Is Having A Baby At The Age Of 20 With Travis Scott Because She Wants To Guarantee A Season 2 Of Her Reality Show That No One Really Liked In The First Place

A minimum 18+ year commitment to a child for a reality show that people don't even like and is rumored to be heading toward cancellation? I highly doubt this is the winning theory.