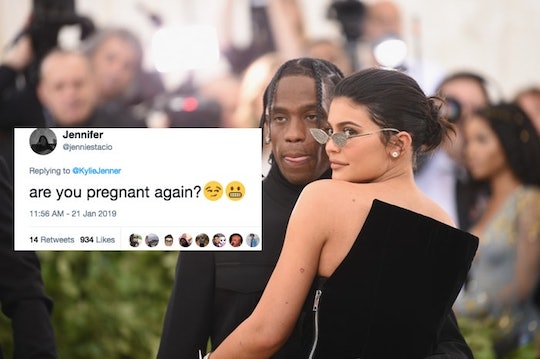 Celebrities are no stranger to invasive questions and being at the center of rumors, and it seems like one requirement to make it in the industry is knowing how to shut those things down. In an example of how to handle rumors and speculation, Kylie Jenner responded to someone asking if she's pregnant again and set the record straight with one simple tweet.

The Kardashian-Jenner family is no stranger to pregnancy rumors. Kim Kardashian, for instance, was the subject of her own pregnancy rumors in early 2019. Kardashian, however, recently confirmed she's expecting her fourth child with husband Kanye West via surrogate, according to USA Today, so it's not surprising that fans decided to turn their attention to Jenner.

Jenner has one daughter, Stormi Webster, born Feb. 1, 2018, with rapper Travis Scott. She's opened up about wanting more kids in the past. According to the Daily Mail, in October 2018, for instance, Jenner told fans on Snapchat: "I want another baby but 'when?' is the question and I'm definitely not ready right this second. And I don't know when I will be, but yeah, when I do, I'd love to share more of that with you guys."

It seems that, although Jenner is planning to have a bigger family in the future, 2019 is still not the year. But a recent tweet had fans thinking different. On Jan. 21, Jenner tweeted, "I have something really exciting i get to share soon with you guys! I’ve been cooking this up for awhile i can’t wait to share my new project alreadyyy."

Of course, fans were quick to tweet back to Jenner with their own guesses of what she had to share. Most fans asked about Jenner's work. One tweeted, "is it related to kylie cosmetics?" Another asked if Jenner's news was related to a song.

Jenner responded "no" to both, but a third fan decided to tweet asking, "are you pregnant again?"

She responded in good faith, with one simple: "Noooo lol."

In the context of Jenner's tweet, most people could probably already guess she wasn't talking about pregnancy. After all, when celebrities talk about new projects they're "cooking up," they don't usually mean kids.

Besides, Jenner was famously hush-hush when it came to her pregnancy with her daughter, Stormi. She didn't even share that she was pregnant with her fans, instead choosing to make an announcement after Stormi was already born. Nobody can blame her for that decision, though. Pregnancy can already be emotionally and physically taxing. If a mom decides she wants to keep that journey private, that's perfectly fine.

With the pregnancy rumor out of the way, though, fans are still wondering what project Jenner is referring to. It's not a song or anything to do with her makeup line. Jenner also responded to a fan's tweet asking if it was a new partnership with "no", so the possibilities really seem endless.

Jenner did say she'd get to share the project "soon." Hopefully, fans won't have to wait much longer to find out what she's been up to!