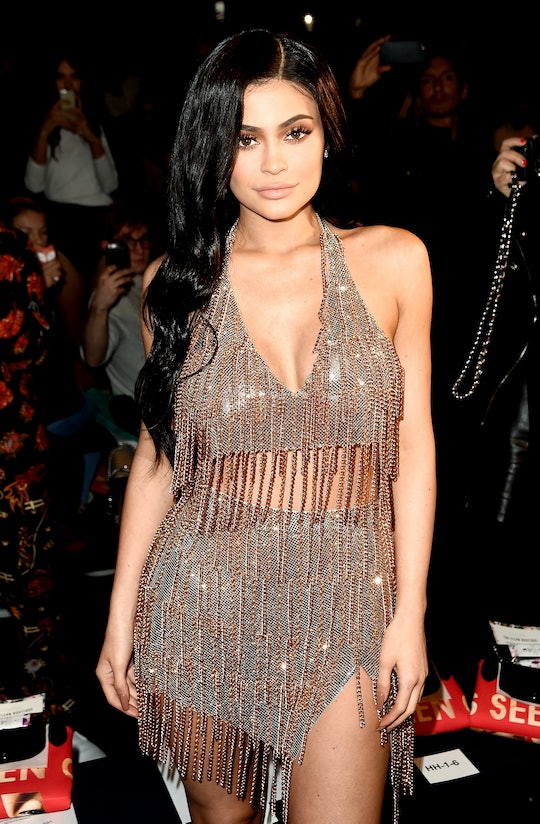 Prior to the much awaited announcement of her daughter's birth, Kylie Jenner had been on something of a social media hiatus. She was keeping a low profile to privately enjoy her pregnancy with her friends and family out of the public eye. But Jenner recently returned to Snapchat with a huge hint about her daughter's name. While she has yet to officially share the baby's name, fans are Sherlock Holmes-ing it again trying to figure out the clues.

Jenner posted to Instagram on Monday night with a photo of a massive floral arrangement in what appears to be the shape of a C. Her caption reads "Khloe" with a heart-eyed emoji, seeming to suggest that it was a gift from her big sister, who is a soon-to-be mother as well.

Her Snapchat story included various photos of floral gifts from other members of the family, all of which include roses in hues of pinks and reds. The arrangement from her sister Kourtney Kardashian included a sweet note that reads, "My beautiful angel welcome to the world: You have a lot of cousins waiting to play with you. I love you. Auntie Kourtney." But it was the gift from Khloé that looks to be the most loaded with meaning.

Jenner's daughter was born at 4:43 p.m. Pacific Time on Feb. 1 and she weighed 8 pounds 9 ounces, according to People. Jenner kept her pregnancy journey quiet, despite raging rumors about the expected addition to the Kar-Jenner family. She finally broke the news after her daughter made her arrival, with a heartfelt Instagram post and a tell-all video. In her post, she explained her reason for keeping the news under wraps:

I'm sorry for keeping you in the dark through all the assumptions. I understand you're used to me bringing you along on all my journeys. My pregnancy was one I chose not to do in front of the world ... There was no gotcha moment, no big paid reveal I had planned. I knew my baby would feel every stress and every emotion so I chose to do it this way for my little life and our happiness.

Since her big announcement, Jenner has been catching her many fans up on what they missed during her social media down time. A flood of bump pics and baby shower details have since been made public. One thing that Jenner still has still kept hush-hush is the name of her baby. Aside from the possibility of a "C" name as implied by Khloé's gift, fans have another theory about what Jenner may be naming her baby.

Jenner has dropped a lot of butterfly hints throughout her secret pregnancy. From photos of butterfly rings on her hand, to a butterfly necklace for boyfriend Travis Scott, to matching butterfly tattoos, and Scott's song "Butterfly Effect," it's understandable that her followers are assuming it's some kind of symbolism. Jenner's recently released makeup pallet is called "Posie," which some believe is short for butterfly in Spanish, "Mariposa." And I have to admit, that would make for a seriously adorable baby name — either that, or Jenner and Scott just really like butterflies.

There's no "C" in Mariposa or butterfly, though, so both theories can't be true. One thing is for sure, Jenner's family has a thing for large floral arrangements. After baby girl Chicago’s birth via surrogate on Jan. 15, Kim K. and Kanye West received beautiful roses from the family as well, one of which was an arrangement from Khloé that spelled out "CHICAGO," the baby's nickname. Jenner also presented Kim with roses, her arrangement in the shape of a heart.

Jenner hasn't responded to either theory about her baby's name, but her return to social media could mean that she will reply at some point. Here's hoping fans don't have to wait another nine months to learn that sweet little girl's name.