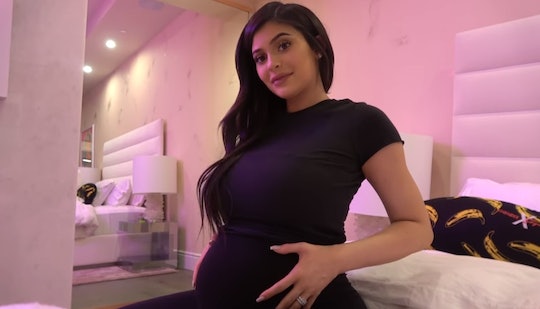 Kylie Jenner Revealed Her Daughter's Name & It Is So, So Beautiful

After months and months of speculation and mystery, the youngest of the Kardashian-Jenner brood officially confirmed her baby news. Now Kylie Jenner has also revealed her daughter's name, and it's so beautiful. Considering how much creativity and planning went into Jenner's pregnancy reveal and birth announcement, it's no surprise that she landed on such a unique and special name for her baby girl. On Tuesday, Jenner revealed that she and boyfriend Travis Scott named their daughter Stormi.

When Jenner finally confirmed her pregnancy news on Instagram on Super Bowl Sunday, it was actually part of a beautiful baby reveal video, announcing that the child fans have speculated about since last September was already born. Jenner gave birth to her daughter on Feb. 1, with her family and boyfriend Travis Scott by her side, as you can see from the touching video montage, which she titled "To Our Daughter." In the 11-minute video, she provided fans with a peek into the last nine months of her pregnancy journey as well as a small glimpse of her baby's itty bitty hand. But she left out one big detail... a name.

And today, Jenner finally shared this detail, too. She wrote on Instagram, along with an adorable photo of her baby girl grasping onto her hand with the caption, "stormi 👼🏽."

Leading up to today's reveal, fans were *certain* that Jenner had been dropping some major hints about her daughter's name throughout her pregnancy. The biggest fan theory that surfaced was that Jenner and Scott's daughter would be named Butterfly, or something in the same vein.

After all, Scott and Jenner got matching butterfly tattoos in June 2017, as Us Weekly reported. The tattoos were documented on Snapchat and Us Weekly reported that fans thought, at the time, that the tattoos were only a nod to Scott's song "Butterfly Effect." Butterflies appeared throughout Jenner's pregnancy, from the diamond butterfly necklace Scott gave Jenner in August 2017, according to TMZ, to a photo the 20-year-old reality star posted of her bubblegum pink nails along with pink butterfly jewelry shared on her Instagram account months later in November 2017.

More recently, within Jenner's pregnancy reveal and birth announcement video, fans noticed that the camera zoomed in on the same butterfly necklace Scott had given Jenner.

Fans also theorized that Jenner's daughter might be named Monarch or Posie, since matriarch Kris Jenner posted about her daughter's "Posie K" lip kit launch on the day that Jenner's little one was born. According to E! News, fans thought Posie was a solid theory since it's short for Mariposa, which is Spanish for butterfly.

When Jenner finally revealed that she had her baby, in addition to posting her baby reveal video, she posted a couple messages to fans on her Instagram account. "Pregnancy has been the most beautiful, empowering, and life-changing experience I've had in my entire life and I'm actually going to miss it," Jenner wrote to her 102 million followers. She went on to explain to her fans why she kept them "in the dark through all the assumptions," writing:

I understand you’re used to me bringing you along on all my journeys. My pregnancy was one I chose not to do in front of the world. I knew for myself I needed to prepare for this role of a lifetime in the most positive, stress free, and healthy way I knew how.

Jenner's long-awaited baby reveal was met with joy and congratulatory comments from her legion of fans. And one of the last remaining pieces of this puzzle was her baby's name. Now that this has also finally been revealed, let the celebration continue!