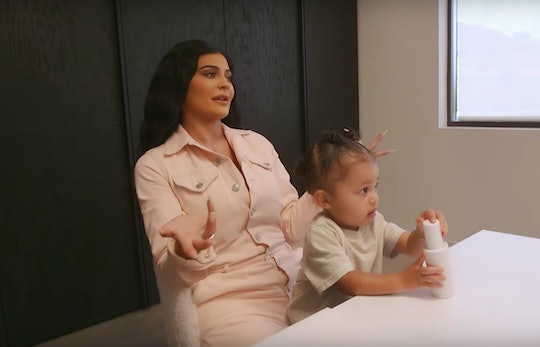 When it comes to balancing motherhood and a career, it's not an easy task. Ask any woman who has had to do it. However, one of the privileges of being extremely successful is that when you can sometimes have your own office, you can make your own rules... like a personalized room for your daughter, for example. Like Kylie Jenner, who recently revealed her daughter Stormi has a bedroom in her office in her latest "day in a life" vlog, and it is precisely as glamorous as it sounds.

In the video, Jenner takes viewers through a typical day in her life. It begins early in the morning, with her admission that though she had planned to start filming earlier, Stormi got her up early, and ended up delaying the process a bit. While she was still asleep, Jenner got a head start on her shower and getting ready process, all while waiting for her daughter to get up, so the two could head over to her Kylie Cosmetics offices together.

The video goes on to show Jenner being greeted by a slew of text messages from "mommy" and "Kim K" (can you fathom?) and then weaving in and out of a variety of meetings. Jenner says in the video that she and her Kylie Cosmetics team are working on new products, apparently including an SPF formula. However, the real star of the workday was Stormi, of course.

After wrapping up one of her meetings, Jenner heard her daughter in the building, assuming that one of her nannies or assistants brought her there. She gets up to greet her daughter, who is likewise happy to see her. Then the two are seen playing throughout the halls of her office, driving around in a little toy car, and going into Stormi's own personal play room.

"It's hard to manage mom life and work life sometimes," Jenner explains. "That's why I made her a bedroom here. So she could be with me and still have fun."

Then the shot moves to Jenner in another skincare meeting, with her daughter on her lap. “Stormi is in all my meetings,” she explains. “She really is.”

Prior to the vlog, Jenner had been transparent about the fact that she's doing parenthood "her way," according to E! News, given that she is, after all, part of Hollywood royalty and running her own billion dollar makeup business all while barely being able to drink legally. (Truly, it's a thing to behold.)

"I always knew I wanted to be a young mother," Jenner told Interview Germany, according to E! News. "I remember people used to ask, 'Are you ready for this?' And I always knew I was ready but you don't know what that love and that feeling is like until after you have a child. She really comes before me so that is a lot to take in at a young age but I feel like I was definitely made for this and she has changed my life for the better."

In March of this year, Forbes reported that Jenner is officially topping the list of youngest self-made billionaires in the country, as her makeup and skincare company, Kylie Cosmetics, has appraised for that much. It's an extremely impressive feat, considering how young she is, and how profoundly successful she's been.

Be all of that as it is, it's clear that Jenner's favorite role is still being a mother. After keeping her pregnancy one of the best-kept secrets in reality TV history, she delivered Stormi Webster in February of last year. And a few months later, according to Us Weekly, Jenner had shared that she hopes Stormi will at least in some part run Kylie Cosmetics when she grows up — and it seems her training has already begun.