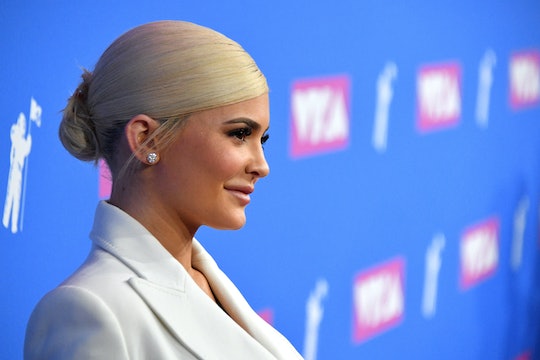 With less than two weeks left in 2018, now is a prime time to reflect on everything that's happened over the past 12 months. Because there's just something about flipping the calendar and writing "2019" that makes people all nostalgic — parents, especially. Those who have welcomed little ones into their families this year would probably say their babies were the highlight of 2018. (You know, while simultaneously wondering: Where the heck has the time gone?) Celebrities are no exception to this. So it's probably not all that surprising to hear that Kylie Jenner says baby Stormi made 2018 "the best."

On Tuesday, Dec. 18, the youngest of the Kar-Jenner siblings took to Instagram to thank fans for their support — and to give a hat tip to 2018, ET Online reported. Alongside a photo of herself holding her 10-month-old daughter, Stormi Webster — whom she shares with boyfriend, rapper Travis Scott — Jenner shared a touching message. "Just thinking about how much i love each and every one of you. thank you for all the love and support this year," the 21-year-old makeup mogul wrote. "2018 has been unforgettable thanks to you.. and having Stormi of course has made it the best. i can’t wait for 2019💋."

Jenner's followers practically melted from the cuteness of it all. One Instagram user wrote, "Isn’t having a daughter incredible? Being a mom is my favorite thing ever 😍."

Another person gushed, "I literally don’t think stormi could get anymore beautiful!! Just like her momma @kyliejenner 😍😍."

Someone else made a bold prediction, writing "I have a feeling u are pregnant!!! And u will be announcing once u are almost due!!!💖." Seriously?! Didn't she basically do this earlier this year? (She did.)

As CNN reported, Jenner practically broke the internet back in February when she finally announced that she had given birth to a baby girl on Feb. 1. The big news came after months of speculation and pregnancy rumors resulting from the reality TV star practically going MIA both on social media and in person. Then on Feb. 4, it happened. "I'm sorry for keeping you in the dark through all the assumptions," Jenner wrote on both Twitter and Instagram. "I understand you're used to me bringing you along on all my journeys. My pregnancy was one I chose not to do in front of the world. I knew for myself I needed to prepare for this role of a lifetime in the most positive, stress free, and healthy way I knew how."

In addition to becoming a mother, Jenner also hit another impressive milestone: She made Forbes' annual ranking of America's richest self-made women. Not only that, but at 21, she's on track to become the world's youngest self-made billionaire in history, according to The Hollywood Reporter. Which is certainly no small feat.

So yeah. You have to admit Kylie Jenner has had one hell of a year. It's incredibly sweet, though, that despite the enormous success in her career she, considers still the addition of her baby girl the best part of 2018. Stars: Maybe they really are just like us after all.