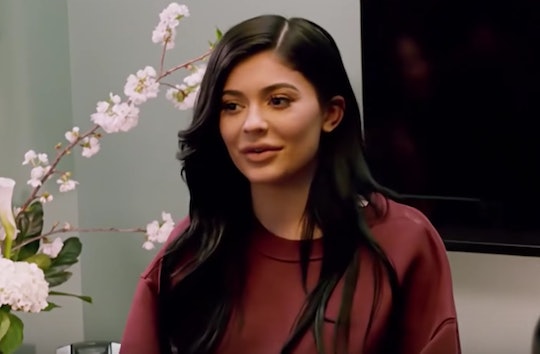 When Kylie Jenner hid her pregnancy for nine months last year, people were definitely shocked to find out that she had kept her secret so well. No one could ever begin to fathom that Jenner had kept her pregnancy a secret for so long, but she did — and in the beginning of February, her daughter, Stormi Webster, was born. In the weeks following Stormi's birth, Jenner could not look any happier to be back in the public eye, but it seems as if the pressures still exist from before she went away. This is because, over on Snapchat, Jenner said she needs to lose 20 pounds and it's pretty sad that she feels some pressure to be thin or bounce back to that pre-baby weight.

As previously stated, both mother and baby could not look any happier to celebrate Stormi's first few weeks of life. Together, Stormi, Jenner, and Jenner's boyfriend (Stormi's father) Travis Scott have celebrated easter, gone on their first official family walk, and enjoyed all the time they've spent together, all of which has been captured on Jenner's social media.

After taking that break from social media, fans were happy to see Jenner back, and happy to have this glimpse into her life. But being back in the public eye comes with everyone staring at you, which could be why Jenner stated that she needs to lose weight. On Thursday, Jenner posted a video of the most delicious looking dinner rolls and a dish of butter on her Snapchat, according to E! News, which she obviously wanted to tell people about. But instead of just enjoying a roll, Jenner gave a disclaimer before digging in. "I need to lose 20 pounds, but this just looks too good," Jenner said in the video. Come on. That's not necessary.

What's really upsetting is her wording — losing weight isn't a necessity. While it's natural to want to lose weight, stating that losing 20 pounds is something she "needs" is her being a little hard on herself. Jenner's life and lifestyle is different now as a new mom and she shouldn't feel pressured to lose weight or try to lose weight fast, just because she had been pregnant for so many weeks and gained a little weight over her pregnancy.

Sure, during a brief question and answer session on Twitter in March, Jenner revealed that she had gained some weight during her pregnancy (40 pounds, according to E! News) and gained a few pregnancy cravings while she was at it (which fans learned about during her pregnancy vlog). But during the question and answer session on Twitter, Jenner told her fans on that she had craved Eggo waffles, fast food from In-N-Out Burger, and doughnuts. And when she gave birth, she had bread waiting for her for her first post-baby meal — heck yeah. The fact that she was open about these things was awesome. But judging from the wording in that her recent Snapchat, Jenner isn't necessarily satisfied with her current weight or post-baby body, in spite of looking amazing in recent photos posted to her Instagram.

But let's be honest, the pressure to lose baby weight is a big one for most new moms, so it shouldn't come as a surprise that Jenner feels the same way — especially since she spends a lot of time in the public eye. If you've read an interview with any new mom in Hollywood, then you know they've felt pressured to lose their baby weight. But this doesn't just impact celebrities — women who aren't celebrities feel this immense pressure, too. But a woman's body goes through so many changes during their pregnancy (they're growing a human being in there for nine months, after all) that it is very silly to expect that they will immediately bounce back to their pre-baby weight or that their postpartum body will look like what it did before the baby came.

Jenner making these comments about trying to lose weight only reiterates this negative stereotype and adds to the misconception that bouncing back to a pre-pregnancy body is something that is easy. While Jenner might want to lose 20 pounds, it's clear that she is enjoying the simple things in life, too. Embrace those carbs, girl.