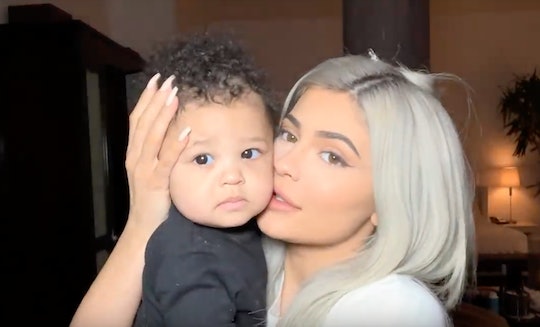 It's hard to believe that just one year ago, no one knew that Kylie Jenner was pregnant and that she was purposefully keeping her pregnancy a secret. But now, Jenner has nothing to hide, and she is sharing so much of her life as a mom to her 9-month-old daughter, Stormi Webster, with boyfriend Travis Scott. Because of this, fans are probably thrilled that Kylie Jenner shared behind-the-scenes moments with baby Stormi while on tour with Scott. There's no denying that Stormi is such a cute baby and Jenner is such a good mom.

It's hard to believe that Jenner and Scott balance their lives, careers, and going on the road for Scott's Astroworld tour, all while being parents to Stormi. But, Jenner's newest YouTube video gives some insight as to how the parents make their lives look easy, while simultaneously sharing a part of their lives that fans have never seen before.

In the video, Jenner takes fans through her routine on tour, which involves going to the venue with Stormi, and hanging out backstage while Scott performs. The entire video is worth watching to get a grasp on how intense Jenner's life is, and to see the super adorable moments featuring Stormi.

Jenner not only captured Stormi saying "Dada" on film, but she also was able to capture Stormi standing up on her own for one of the first times, and show viewers around Stormi's own personal room back stage (complete with a couch, TV, and flatscreen TV to watch her dad perform). Those two things are huge milestones — and it's so awesome that Jenner let fans in on this part of her daughter's life.

Stormi is living lavishly. Her room backstage has snacks, toys, and plenty of visits from her mom and dad (when he isn't on stage) until she goes to bed. This is what Scott was referencing when he told E! News a few weeks ago when he said that Stormi has "got her own dressing room vibe." Stormi definitely has her own dressing room — and it's pretty incredible for her age.

But Stormi doesn't just have her own room backstage, she has her own hotel room, too. In another video, posted to Jenner's YouTube account on Tuesday, Jenner explained that she gets two hotel rooms while she is on tour with Scott — one for them to sleep in and another room where she keeps her outfits and lets Stormi play in.

Although it might not be what the average parent does while on the road, it's clear that both Jenner and Stormi are loving this set up — throughout the first video, Stormi can be heard having so much fun playing in the background while Jenner does her makeup.

Although tour life might seem glamorous, these videos prove that Jenner is just like every other mom. She cares about her daughter's privacy, she makes sure that her daughter has everything she needs, and she puts a huge emphasis on making sure that Stormi has plenty of time with her mom and dad (even if her dad is performing in front of huge crowds in a different city every night). And Jenner loves doing it all.

I feel like it's been so amazing, and so much fun. I'm learning so much more about myself and life, and it's been such a great experience.

It's easy to see how much Jenner loves being a mom to Stormi in these videos. She's done so much in the past year — she's given birth at the age of 20, raised her daughter, and is now living life on the road with her own family. Now that fans have an idea about what goes on in Jenner's life, it's only fair that they'll want to see more from Jenner and Stormi. But for now, these videos serve as a perfect look into their lives on the road.

More Like This
Goldie Hawn & Kurt Russell Got Royally Dressed Up For Their Granddaughter's 4th Birthday Party
Gabrielle Union Shares Sweet Video Of Kaavia In A Spot-On Little Mermaid Costume
Barack Obama Says He "Won The Lottery" When He Married His Wife Michelle 30 Years Ago
The Cannon Legacy Is Strong: Here's A Look At All Of Nick Cannon's Kids