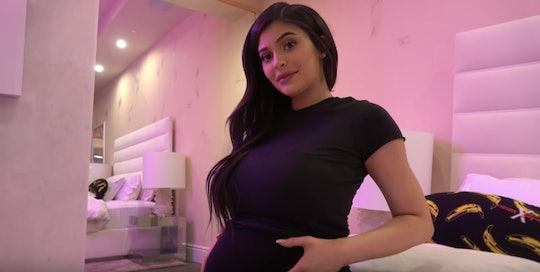 Kylie Jenner tortured fans for months with radio silence as the rumors of her pregnancy raged. Thankfully, now that the rumors have been confirmed and her sweet little girl has made her arrival, the silent streak has ended. Fans have been treated to a number of photos and videos of the newest member of the Kar-Jenner family. Most recently, these photos of Stormi and Kylie Jenner's grandma show that the new baby is bonding with every member of her family.

Jenner posted two photos of Stormi to Instagram on Sunday that showed her being lovingly cradled by her great-grandmother MJ Shannon. She captioned the photo, “i mean.. does it get any better than this?” In the first photo, Shannon, Kris Jenner's mom, is holding Stormi, who is wrapped in a white blanket while sucking on a pacifier. The second photo is of Stormi's tiny, adorable hand clutching Shannon's thumb. Is there anything cuter than baby fingernails? I don't think so. And Kylie's caption reflected that — some of the best new-parent moments include seeing the family you've always had with your newest addition.

Fans of the famous family will recognize Shannon from her numerous appearances on Keeping Up With The Kardashians, as well as the latest Kardashian-Jenner family Christmas card photo. Shannon recently relocated to be closer to the family, making quality time with her grandchildren — and their children — a lot easier. In a recent episode of KUWTK, Kris announced that she bought Shannon a condo, according to The Cut.

Kylie and her boyfriend Travis Scott welcomed baby Stormi about a month ago. Stormi was born at 4:43 p.m. GMT on Thursday, Feb. 1, according to People. The baby came in at 8 pounds, 9 ounces and has been wowing fans ever since. Kylie shared on Instagram that she chose to keep her pregnancy a secret for personal reasons, saying:

The new mom also thanked her family in the announcement post for helping her to keep her big news under wraps until she felt comfortable sharing it with the world. Judging by Kylie's posts since then, she and her daughter are getting in plenty of quality family time. She and Shannon in particular seem to be close; Kylie shared a photo of the two of them in September 2015, relaxing by the pool with the caption "I love you my grandma."

It's no surprise that Shannon has a strong bond with her grandchildren — they reportedly have a lot in common. Shannon told the Daily Beast that she founded her own fashion business, Shannon & Co., in San Diego in 1980. The store is still in business today, as a flourishing children's boutique in San Diego's La Jolla community. An interest in clothing and fashion seems to run in the family.

Shannon isn't the only one lucky enough to get to snuggle with little Stormi. Kylie posted a video to her Snapchat Story on Saturday that showed her BFF, Jordyn Woods, rocking Stormi with the caption, "can they get any cuter?" E! News reported that Woods has been Kylie's constant companion since she gave birth to Stormi, so she and her bestie's baby most likely have a very special bond.

They say that raising a child takes a village, and it looks like Kylie has quite a few helping hands that are willing to hold her daughter. I mean, can you blame them? Just look at those chubby little cheeks.