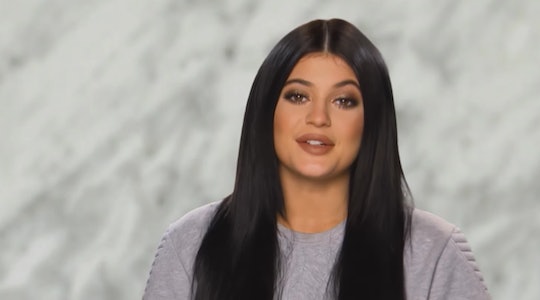 The countdown to the final Kardashian Christmas card, like Christmas itself, has been highly anticipated — all because of Kylie Jenner. Since it was first reported at the end of September that Jenner is expecting her first child with boyfriend Travis Scott in the new year, Jenner has been elusive. With the reveal inevitably around the corner (maybe), people are getting antsy. And on Christmas morning, Jenner showed up on Khloé Kardashian's snapchat, leaving everyone really, really confused.

The Kardashians know how to do Christmas and Christmas Eve right — and this year has been no exception to this. For every day leading up to Christmas, the Kardashians have been revealing one photo from their Christmas card shoot. And on Christmas Eve, the family showed what they had been building up to — a grand holiday party that would put your family's celebration to shame. According to E! News, the party was hosted at Kris Jenner's home, featuring musical performances and a guest list of celebrity friends.

Throughout the evening, Khloé and older sister Kim Kardashian were snapchatting all of the festivities from the evening and party guests in attendance (like their very famous family members). But they didn't snapchat the one family member that everyone is dying to see — Kylie. Instead Khloé and Kim only teased about Kylie's potential appearance and some shadowy figures appeared in the background of Khloé's snaps that could possibly have been Kylie.

On Kim's Snapchat, she looked directly into the camera almost teasing fans with her knowledge. "It's the 2017 Christmas Party," Kim said. "I know what you guys really want to see." Fans were expecting and hoping to see Kylie — but what they got was the next best thing — a look at Khloé's (newly confirmed) pregnancy bump. Khloé could not look more radiant, and knowing that she really is pregnant could not be any more exciting.

But fans were hoping to see more of Kylie last night, taking to Twitter to express their confusion and frustration.

While Kylie might have been spotted (or nearly missed by a lot of users) at the Christmas Eve party, she was celebrating Christmas with her whole family on Christmas morning. On Christmas Day, Khloé finally snapchatted with Kylie — from the shoulders up (of course) and addressed Kylie's absence from her snaps the previous night.

"People think you weren't there last night," Khloé said to Kylie in the Snapchat. "I was," Kylie replied. "She's a secret little bunny," Khloé said at the end of the snap. Talk about an understatement — Kylie definitely has a secret that she has been keeping from her fans.

Fans were left even more confused by Kylie's quick appearance in her sister's Snapchat on Christmas, wondering if they would ever see a full body shot from the former social media-friendly celeb. But this tease seemed to be good enough for a lot of people. After not seeing Kylie active on social media for weeks, her presence was much appreciated.

As previously stated, the Kardashian's have been building up to their final Christmas card photo reveal. And a lot of people have expected Jenner to confirm or deny her rumored pregnancy in that final Christmas card photo. But as of the morning, the Kardashian and Jenner family have not yet shared that final, highly anticipated photo leaving some people to wonder (myself included) if that announcement will ever come.

Still, seeing Kylie on Christmas morning (even without confirmation of the pregnancy) was just as good as any other Christmas present under the tree. All that is left is for Kylie to come out and say something — anything — about her pregnancy to make the holiday complete.