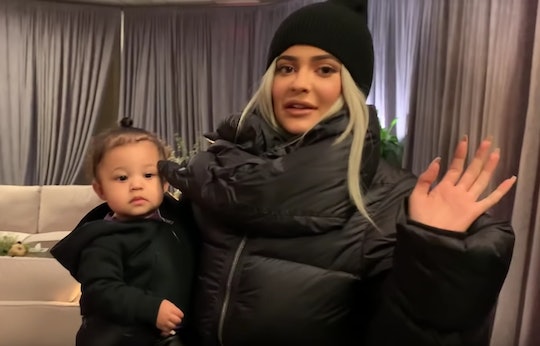 Kylie Jenner's 1-year-old daughter, Stormi Webster, with her ex-boyfriend, Travis Scott, has already proven to Jenner's followers that she is so smart. She's talking up a storm (no pun intended), walking everywhere, and is now practically an artist, according to Jenner's Instagram story from Saturday. Seriously, people will be so impressed after Kylie Jenner shows off Stormi's cookie haunted house decorating skills — she's got some serious talent, y'all.

Kylie Jenner's daughter is the star of her Instagram account. Jenner is always sharing the sweetest photos and videos of Stormi, who seems to be getting smarter with each and every post. The little girl is clearly taking after her very famous and super talented family members — and Stormi's most recent creation is some serious proof of that.

On Saturday night, Jenner took to her Instagram story where she shared a video of Stormi's most recent creation — a "haunted cookie house." The house (which is exactly like a gingerbread house, but for Halloween) was built by Jenner, but the decorating was all done by Stormi.

In the video tour of the house, Stormi's handiwork shines. She did an amazing job with her color palette and added some frosting drips on the house for a seriously spooky affect, before clearly getting bored and leaving the back of the house unfinished.

While this project shows how big Stormi is getting (she can decorate a gingerbread house now, y'all) it's also such a fun, sweet, and messy toddler creation.

It's the little seasonal projects like this one that makes the seasons and holidays like Halloween so much better. These are the memories that Jenner will cherish making with Stormi — even if she made a mess out of her decorations.

The two of them are obviously getting in to the spirit of spooky season, which means that it won't be long until they wear their own costumes for Halloween and go trick-or-treating. It will be very hard for the mother-daughter-duo to top their costumes from last year — and I can't wait to see how they out do themselves. For Halloween 2018 (and Stormi's first), Jenner and Stormi wore two matching costumes for the holiday. They dressed up in the sweetest skeleton sweatsuits for a "girls Halloween dinner", according to People, and as pink butterflies for some seriously cute photos, according to Harper's Bazaar.

There really is no telling what they'll dress up as this year (or if they'll even match again). But, knowing Jenner, their costumes are going to be epic.

Jenner clearly has her hands full right now between running her own cosmetics line and doing some cute crafts with Stormi. But, this same weekend she was also able to answer some of her follower's questions on her Instagram story where she revealed that she doesn't plan on having any more kids anytime super soon, according to People. "I can't wait to have more babies," Jenner wrote on her Instagram story. "But not ready just yet."

Jenner is clearly doing an awesome job with Stormi, and when she is ready to have more kids, she will surely let people know. Until then, people should like Jenner enjoy the spooky season and all that comes with it with Stormi.