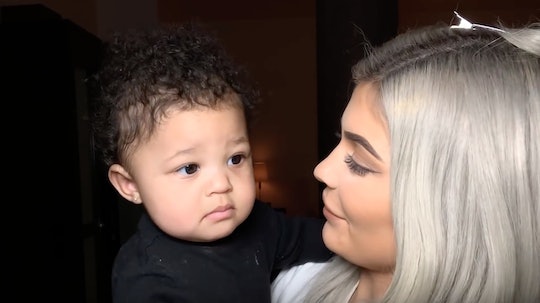 Kylie Jenner & Stormi Are *Practically* Twins In Their Matching Swimsuits

The bond that Kylie Jenner shares with her daughter, Stormi Webster, is so sweet. Through Jenner's Instagram photos and videos, you can tell that Stormi loves being a mama's girl. So, it makes sense that Kylie Jenner and Stormi are practically twins in their super cute, matching bathing suits while on vacation — they really could not be any more adorable together.

A lot has changed in a year. This time last year, people were still questioning if Jenner was even pregnant or if she would confirm her pregnancy at all. But, in the beginning of February, Jenner came clean — she had been pregnant and had welcomed a daughter with boyfriend, Travis Scott, on Feb. 1, according to Elle. So, it makes sense that Jenner (and Stormi) would be celebrating this now, especially since turning one is such a huge milestone.

Jenner, her best friend, Jordyn Woods, and Stormi are celebrating the little girl's big birthday two weeks early in an unknown tropical location, according to People. And the girls seem like they're having such an amazing time. In photos from the vacation, posted to Jenner's Instagram account, Jenner, Woods, and Stormi can be seen posing in different locations on vacations looking so happy to be away for a moment.

As Jenner wrote in the caption of one photo, "Let the birthday adventures begin..."

While some kids celebrate their first birthday with a smash cake or a petting zoo, Stormi is celebrating her first birthday on some beach in some exotic location — and that is completely, OK. Just look at how happy she seems to be hanging out with her mom.

This definitely isn't the first time that Stormi has shown that she is her mommy's mini-me. During the Kardashian's annual Christmas Eve party, Jenner and Stormi wore matching sparkly outfits while looking so fancy. And when Jenner's older sister, Kim Kardashian, gifted Stormi a mini Louis Vuitton handbag earlier this month, you could tell that the little girl is clearly turning into her mother. Not that Jenner seems to mind.

In a YouTube question and answer video with Woods, over this summer, Jenner revealed that Stormi has inherited a lot of her looks. Jenner said:

She's my twin. Now, she's looking a lot more like her dad. I prayed and prayed that she would have my big eyes, and she has the biggest eyes ever.

Jenner also stated that Stormi has inherited her slightly big ears and her forehead. But there is one thing that Stormi was born with that Jenner doesn't have — naturally big lips. "The one thing I was insecure about, she has," Jenner stated in the video.

That is just another example of how much the mother-daughter duo are so much alike. This, on top of their super cute, matching outfits, really drive in that point.