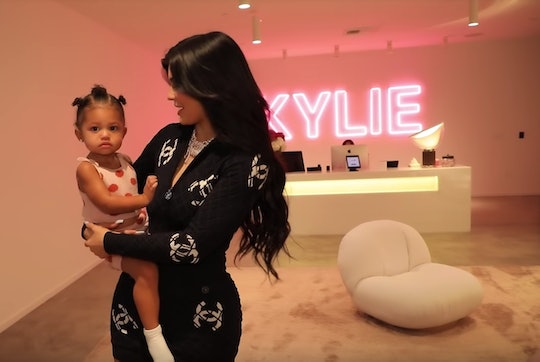 Kylie Jenner's Office Has A Perfect Little Room For Stormi

Kylie Jenner lives a pretty fabulous life. As the CEO and founder of her own cosmetics company, Kylie Cosmetics, she's living the dream. And her 1-year-old daughter, Stormi, is just reaping the benefits. Watching Kylie Jenner's tour of Stormi's room in her office is very impressive. Not only is Jenner's office incredible, but Stormi's room in the office is just as amazing.

Kylie Jenner is one hard working mama. She is the founder of Kylie Cosmetics and inventor of the Lip Kit — the simple set that transforms your pout to (almost) look exactly like her own. She became the "world's youngest billionaire" at 21 years old, according to Forbes, and now sells her products at Ulta Beauty stores nationwide, according to Teen Vogue. Simply put — she has built and is currently running her own empire. And if that wasn't obvious enough, Jenner's most recent YouTube video solidifies that.

On Thursday, Jenner posted a video of her giving fans a tour of her office — and people are seriously impressed with it. Of course, her office comes equipped with the things found in every office — meeting rooms, rolling chairs, and a (fully stocked) kitchen. But the office features so many fun and special things, like a giant TV constantly playing Keeping Up With The Kardashians in the lobby, and pink and white M&M's with her face on them. As if those two things weren't incredible enough, Jenner's also has her own room for Stormi attached to her personal office space — and it's something that everyone needs to see.

Stormi's room in her office is outfitted with a crib, a flat screen TV, a ball pit and so many toys, all in Jenner's signature shade of pink. Although some people may think that having a one year old running around the office could get distracting, it's the opposite for her.

In the video, Jenner said that Stormi is always around. "She does spend a lot of time here, she really never leaves my side," Jenner said. "She'll have lunch here, dinner sometimes, breakfast. She is always here."

So, after hearing this, it makes so much sense why Jenner has huge photos of Stormi on the walls in her room and a little room for her daughter directly attached to her office. "She really is my biggest motivator without even knowing it," she said in the video. "She motivates me every day to work harder and be a better person, so I just have her in here because I'm just obsessed with her."

If Stormi is the inspiration behind all of her mom's amazing products, then Jenner should continue bringing her daughter to her office — not that she wouldn't. Jenner clearly has her work-life balance figured out, and it's all thanks to Stormi never leaving her side.

But this isn't the first time that fans have gotten a look inside of Jenner's office. In June, she posted a video to her YouTube channel where she took fans on a journey through a day in her life. This involved her getting ready, going to the office, and attending meetings, all with Stormi by her side.

Since Stormi spends so much time with her mom in her office, it's only fitting for her to follow in her mom's footsteps and take over Kylie Cosmetics one day. In September 2018, Jenner told Glamour UK that she wants Stormi to take over the business when she gets older (but only if she wants to). "I work hard for Stormi and being able to pass Kylie Cosmetics on to her — if she's interested — would be such a cool thing to do," she said.

Until then, Stormi is getting plenty of first hand experience by having her own room in the Kylie Cosmetics office. Who knows? She could be taking over her mom's room in a matter of time.