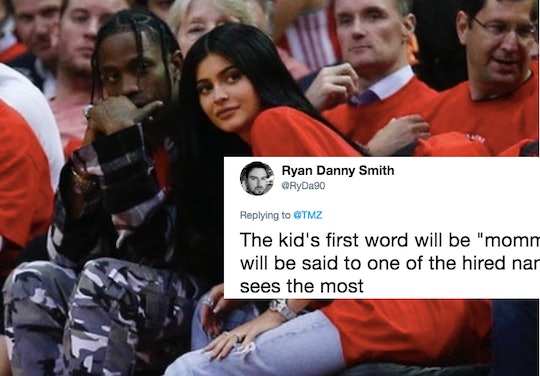 For months, the world was fascinated with whether or not Kylie Jenner was really pregnant. But now that baby Stormi is here, a vocal subsection of internet haters has decided to judge Jenner's every parenting move. That's right, Kylie Jenner and Travis Scott are getting shamed for going out and spending time with each other... without Stormi, and people really need to calm down.

TMZ reported that, on Sunday, the new parents went out on a date in Miami, where they first went to a restaurant, and then hopped on a boat with some friends and some drinks. It seems to be one of the first times that the couple has gone out together since Stormi's birth on Feb. 1, according to TMZ. (People also reported that they went out to lunch in late February.) So hey, good for them! They've probably had a month of super-intense parenting, and are lucky enough now to be able to take a day to remember that they are people, and not just servants to a tiny, adorable despot. What parent wouldn't want to get away for a day to relax?

But of course, that's not how some on the internet saw it. Immediately, the shaming comments started rolling in. One Twitter user wrote, "The kid's first word will be 'mommy', which will be said to one of the hired nannies she sees the most."

Then, of course, there was the classic, "Oh, if you really loved your baby, you'd never want to step away from it even for one second" reaction, perfectly designed to make pretty much every mother out there feel like a terrible person:

It seems that every time a famous woman with a baby does anything that implies she has some kind of life beyond gazing adoringly into her child's eyes, the internet wants to tear her down for it. Watch out, because the trolls are hungry for some good old mom-shaming. Remember when Beyoncé went out on a date and drank a glass of wine, and commenters went into a frenzy because she should be breastfeeding? Or when Chrissy Teigen had the gall to go on a date night not long after giving birth, and people had all the feelings about it? (Of course, Teigen fired off a perfect tweet about it, as is her wont.)

None of these celebrities seem to be endangering their children in any way by going out to dinner, so whether or not they want to get away for a night is nobody's business but their own. Parents are allowed to take some time for themselves. In fact, maybe getting a chance to relax helps them come back more focused and energetic. Yes, sure, parenting is magical, but it can also be really hard, and everyone has to deal with it in their own way.

All signs point to Jenner and Scott being over the moon about their baby, and they have been quite protective of her. The normally all-over-the-internet Jenner stayed out of the public eye during her pregnancy, and waited until Saturday to post the first shot of Stormi's face on social media. The reality star put up a video on Snapchat showing the famous baby, labelling it, "My pretty girl." And yes, it's the cutest.

Back when Jenner announced Stormi's birth, she explained her decision to stay out of the public eye during her pregnancy in a social media post, saying:

She and Scott clearly love their child like crazy. So if they want to go take a day on a boat, the rest of the world can just chill out.