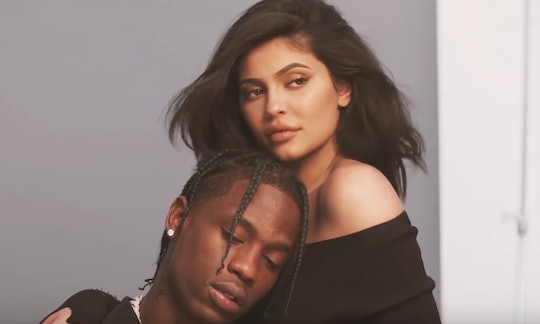 The 2018 MTV Video Music Awards, which aired on Monday night, was full of excitement. Talented musicians and A-list celebrities gathered in one room to celebrate one of the biggest nights in music, and among these celebrities were Kylie Jenner and her boyfriend, Travis Scott, who performed on Monday night. But what you might not have noticed when the award show was airing live was that Kylie Jenner and Travis Scott shared a kiss at the 2018 VMAs.

Those who watched the VMAs pre-show on MTV got to catch their favorite celebrities on the red carpet before the show, but they might have missed Jenner and Scott's entrance, who walked the red carpet separately, according to People. As such, fans didn't see them engage in any PDA on the red carpet.

But once they were inside Radio City Music Hall, where the show was held in New York City, the couple did find some time to show their affection for one another. At some point during the show, according to Cosmopolitan, Jenner leaned in to Scott and pecked him lightly on the lips, before Scott turned away to talk to someone sitting to the side of him. Their kiss was a total "blink-and-you'll-miss-it" moment but was still super adorable all the same.

Although some people (like myself) might have found the kiss to be oh so adorable, other people on Twitter had some *thoughts* about the brief moment of PDA.

But this kiss could have looked "odd" to people for so many reasons. The kiss was only for a split second while the cameras were facing the couple — they could have kissed plenty of times throughout the night without everyone noticing, of course. Also, both Jenner and Scott, especially, are kind of private about their relationship.

It was only recently revealed during an interview with GQ that Jenner said her relationship with Scott is a bit unconventional. "We don't go on dates," Jenner told GQ. In the same interview, Jenner said that Scott doesn't like all of the attention that comes with her level of celebrity, like public kisses at the VMAs — hence, why their kiss on Monday night might have seemed a little awkward. In the interview with GQ, Jenner said:

...I know he doesn't like the attention. That's why we just go the extra mile to keep our relationship super private, or like, if he has events or something, I won't come. Because I want him to do his own thing. I want him to be him. I don't want to be Kylie and Trav. If people don't ever see us together, that's OK with me because we just do our own thing.

That's certainly something fans can respect and understand. Jenner and Scott have been dating for about a year, according to GQ, so their relationship has been a bit of whirlwind. In case you forgot, in February, Jenner gave birth to their daughter, Stormi. But in the months since then, she and Scott have become a little more comfortable with their relationship being in the public eye.

But Jenner and Scott stepped out at the 2018 VMAs for a very special reason on Monday night. Scott performed three songs from his new album, Astroworld: "Stargazing," "Stop Trying To Be God," and "Sicko Mode." And Jenner was there in the audience to cheer on her partner, even if some viewers at home thought she looked a little unenthused while watching him, according to Harper's Bazaar.

Regardless of how Jenner appeared at the VMAs, the moment of PDA that Jenner and Scott shared was pretty cute — even if it did last for a split second.