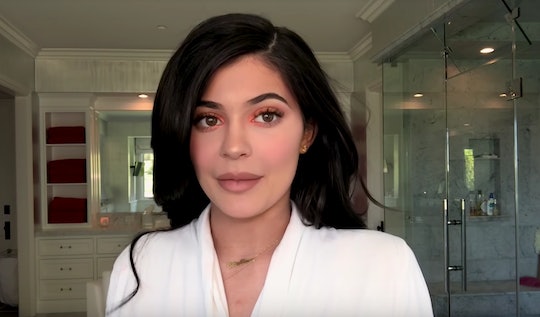 It's hard to believe that Kylie Jenner is just 20 years old. In the past year alone, she has accomplished a lot, in both her personal and professional life. For starters, Jenner welcomed her first child, a daughter named Stormi Webster, with her boyfriend, Travis Scott, in February, all while running a million dollar cosmetics empire. But her hard work won't disappear when she decides to retire or move on to something else. In a new interview with Forbes, Kylie Jenner revealed she wants Stormi to take over Kylie Cosmetics one day, if that's what future Stormi Webster wants to do.

In case people ever doubted Jenner's ability to run a business, then the newest information to come from Forbes might change their minds. On Wednesday, Forbes reported that Jenner's makeup company, Kylie Cosmetics, is worth $800 million and she owns 100 percent of her company. This figure, according to Forbes, makes her one of the youngest "self-made" female millionaires (soon-to-be billionaire) around.

But Jenner doesn't plan on selling her business to the highest bidder or anything like that. In her interview with Forbes, according to Entertainment Tonight, Jenner revealed that she's thought about her daughter inheriting Kylie Cosmetics one day. And it makes complete sense, since Jenner told Forbes that she plans on working on Kylie Cosmetics "forever" and passing it on to her firstborn seems like to best way to do that.

"Maybe one day I'll pass this on to Stormi, if she's into it," Jenner told Forbes.

Indeed, it would make perfect sense for Stormi to go into the family business, if she's interested in her mama's work. Plenty of businesses are passed down from generation to generation, with business owners wanting to keep things in the family. Considering Jenner built her empire by herself, with the initial guidance of her mother, it only seems logical that she may want to pass down that hard work to her daughter — the person who would appreciate and understand all that her mom has done for her.

So, yes, when Jenner said that she would "maybe" pass down her business to her daughter one day, it was undeniably sweet to hear. But a lot of people are not happy with Jenner's Forbes feature — not because Jenner wants Stormi to perhaps inherit Kylie Cosmetics, but because Jenner is described as "self made" in the piece. Some people took to Twitter to dispute the fact that Jenner was described as a "self-made millionaire" by Forbes, according to High Snobiety. Many on social media argued that her family and her connections helped her "make" her own fortune, according to People.

Kylie Jenner's representative and the writer of the Forbes story, Natalie Robehmed, did not immediately respond to Romper's requests for comment regarding the criticism.

Whether you agree with the definition of "self made" or not, people can't argue with the fact that Jenner is a hardworking mom who juggles running a multimillion dollar company all while taking care of her 5-month-old daughter. For a lot of people out there, she can be seen as an inspiration or a testament that they can have it all, though, of course, everyone's experiences and circumstances are different.

Considering that Jenner tends to keep Stormi out of the public eye and hasn't said too much about her little girl's personality, her words about her daughter in this Forbes interview are telling about her already close bond with her baby girl, even if they don't share all the same qualities. During a Q&A video on her YouTube channel, Jenner revealed that Stormi inherited her forehead and big eyes from her, but not her lips, which Jenner said was her "biggest insecurity," according to Harper's Bazaar (and one of the reasons for starting Kylie Cosmetics, according to Forbes). "The one thing I was insecure about, she has," Jenner said, according to Harper's Bazaar. "She has the most perfect lips in the entire world. She didn't get those from me. Thank her dad for those."

While Stormi might not be buying lip kits for the same reason her mom has used and created them, she might be relying on her mom's company in an even bigger way in the future. And that sounds like a pretty good deal to me.