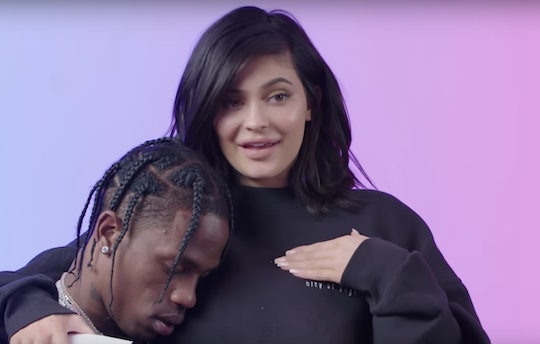 Kylie Jenner has only been a mom to her daughter, Stormi Webster, with boyfriend, Travis Scott, for the past five months. Which means that she is still learning the ropes every single day. There is so much that goes in to being a mother that Jenner will have to figure out throughout the years. But from the sounds of it, she has one vital thing for the future already figured out. In a new interview with GQ, it was revealed that it's pretty much guaranteed that Kylie Jenner will be a pro at making Stormi's future school lunches, all thanks to the one late-night snack she and Scott can't get enough of.

In a super cute video, released by GQ on Tuesday, Scott attempted to answer 23 questions about his girlfriend. While the video revealed that his memory isn't necessarily the greatest, Scott and Jenner were able to agree on one thing: Jenner is a master at making his favorite (and the most perfect) late night snack.

But instead of being an expert at making nachos or other things that some people tend to crave late at night, like brownies or cookies, Scott revealed that Jenner makes an amazing peanut butter and jelly sandwich. "It's a real meal," Scott said, according to People. "It's something I request personally some nights before night night."

And Jenner wasn't humble about her skills, either. "I am a master peanut butter and jelly maker," Jenner said. "He's not just saying that, I really am the best."

It's probably a great thing that Jenner is good at making peanut butter and jelly sandwiches — because PB&J is a staple in every single kid's lunch box until they get sick of it or learn how to make their own lunches. And even once kids grow up, PB&J is one of those favorite meals that you never grow out of — it just tastes like home.

If Jenner is as much of an expert at making PB&J as she claims, then Stormi will probably learn to love her mom's secret family recipe — which Jenner told GQ is an art. In the video Jenner said that her special PB&J requires a "certain kind of white bread," smooth peanut butter, and grape jelly (not strawberry jelly). "Maybe I'll make a YouTube video on it," Jenner said. "No dude," Scott replied. "First of all, we're not giving out my peanut butter and jelly recipe."

Sounds like that's one secret family recipe that isn't getting out of the Jenner-Scott household.

Stormi's pretty lucky on this front, if you think about it. Could you imagine how disappointed Stormi would be if she grew up and realized that her mom's secret family recipe was something like liver and onions? Or pickled pigs feet? Needless to say, Stormi's future lunches, after school snacks, and go-to comfort meal is taken care of, all thanks to her mom and dad.

And if Stormi doesn't end up liking PB&J, then she might be one of the rare few who don't. One survey, conducted in 2016, found that the average American will eat nearly 3,000 peanut butter and jelly sandwiches in their lifetime, according to the New York Daily News, after trying their first peanut butter and jelly sandwich around the age of 4. On top of this, nearly half of Americans "regularly eat" peanut butter and jelly sandwiches, according to the New York Daily News. Needless to say, Jenner and Scott aren't alone in their sandwich obsession. While there is no specific reason why people (like Jenner and Scott) are obsessed with eating PB&Js, it could be because it's super comforting, delicious, and easy to make — and the fact that the sandwich is considered to be the NBA's "recipe for success," according to NPR, doesn't hurt either.

Let's just say, Stormi has lucked out in having a mom who knows how to put together one very tasty snack.