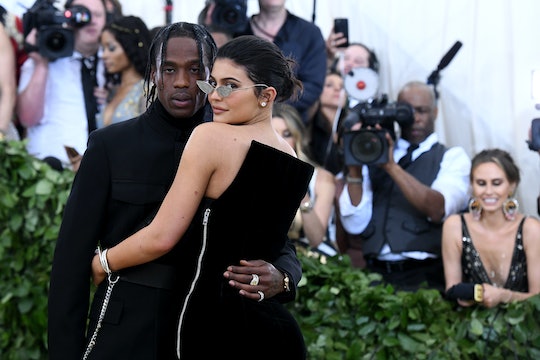 A lot can happen over the course of a year and Kylie Jenner knows this to be very true. It's universally known that 2018 has not only been an incredible year for Jenner, it has been incredibly transformative as well. And Kylie Jenner's 2018 highlights, which she posted to her on her Instagram story on Sunday night, gives visual proof to how much things have changed.

Let's get the obvious aside — this is the year that Jenner and boyfriend, Travis Scott, brought their daughter, Stormi Webster, into the world. Jenner suddenly went from a 20-year-old beauty mogul without a care in the world to a 20-year-old working mom of one, which is a huge thing to go through. But Jenner never seemed phased by how much her life seemed to change in an instant. Throughout 2018, Jenner spoke highly about being a mom and how much she loved her daughter.

Things have changed even from last New Year's Eve. In 2017, Jenner rang in the new year in a super low key way, according to TMZ. While her best friends were partying in Miami, Florida with her boyfriend, Travis Scott (who was performing), Jenner was no where to be seen. This is because Jenner was nine months pregnant at the time and couldn't be spotted partying — at this point she was still keeping her pregnancy a secret, according to Cosmopolitan. But this year, Jenner will be ringing in 2019 with her adorable little family.

Jenner is aware how big of a year it's been for her, which is why her 2018 highlights, which she posted to her Instagram story, are so sweet to see. Here are just a few of those very important highlights.

Being Pregnant With Khloé In January

As previously stated, Jenner kept her pregnancy a secret until she announced that she had given birth. So, fans missed out on a huge portion in her life when moved away from the spotlight. There were so many things that people wanted to know about Jenner's pregnancy and see from her pregnancy — like her bump progress. Most importantly, people couldn't enjoy knowing in the moment that Jenner and older sister, Khloé Kardashian were pregnant at the same time.

In an interview with Evening Standard in May, Jenner told older sister, Kim Kardashian, that she loved sharing this time with Khloé. Jenner said, according to Refinery29:

It was so much fun. [Khloé and I] would just experience everything together. I was a little bit ahead of her, so we were both doing it for the first time and I would just warn her of things that happened.

And luckily, people were able to see evidence of this after Jenner gave birth. When Jenner announced that she gave birth to a baby girl, Khloé shared this never before seen photo of them to Instagram. The wait was worth it.

Giving Birth To Stormi In February

As previously stated, Jenner gave birth to her beautiful little girl on Feb. 1, 2018 — and announced it just a few short days later on Feb. 4, according to CNN. Jenner let fans inside of her labor and delivery when she published a gorgeous video documenting her pregnancy to YouTube that same day.

But, there is still so much that fans weren't able to see. This photo is one of those things, and is a testament to Scott's involvement in Jenner's life and as a father to their child.

Enjoying The Summer In June

Although Jenner was learning how to adjust to life as a mom, she definitely enjoyed being a mom, too. In between working on her multi-million dollar cosmetics line, Kylie Cosmetics, Jenner was able to take some time to spend some time outdoors and relax with Stormi.

Jenner told Vogue Australia in August that Stormi even changed the way she viewed herself. Jenner said, according to Us Weekly:

It's just having a different outlook on life so I can pass that on to her. I want to be an example for her. What kind of example would I be if she said she didn't like her ears, and then I didn't like them either? I just want to teach her that. I'm trying to love myself more.

Seriously, throughout the year, Jenner couldn't stop talking about how much she loved her daughter and her features. "She has the most perfect lips in the world," Jenner said in a YouTube question and answer video in July, according to Us Weekly. "She didn't get those from me."

Hanging Out On A Rooftop In August

With Stormi now in her life, Jenner definitely felt on top of the world this year. After turning 21 in August (and now being able to legally drink), Jenner's priorities didn't change — she partied with her friends and came home to her daughter at the end of the night.

Jenner told Kim in that same interview with Evening Standard that her life really did change forever. Jenner said, according to E! News:

I feel like it's been so amazing and so much fun. I'm learning so much more about myself and life, and it's been such a great experience. Of course, there's hard times and stuff...even in the beginning, just not sleeping, the nights, like baby blues...and all the ups and downs.

Enjoying The Fall In October

In the fall, the family of three embarked on a nation wide tour for Scott's album, Astroworld. This meant that Jenner and Stormi got to spend some major family time with Scott while experiencing life on the road.

Scott told E! News in November that this was a "life goal" of his — to have his family be a part of his life.

But Jenner and Scott also were able to enjoy life at home as a family of three and celebrate all of Stormi's firsts — from her first words (she's a big fan of saying "Dada") to her first Thanksgiving to her first Christmas. It's impossible to believe that all of this could happen in one year but seeing is believing.

And Jenner is definitely looking forward to her future raising her daughter. At least, this is what Jenner told Kim during her in her interview with Evening Standard. Jenner said, according to E! News:

I think more about the future because of her. Every time I leave and I'm stressed about leaving her, I'm like, "I'm doing it for you." Everyone says you change completely when you become a mom, but I really feel the same. Just better.

Kylie will continue to change and feel just as good in 2019 when Stormi turns a year old. And the yearly highlights will only get better from here.