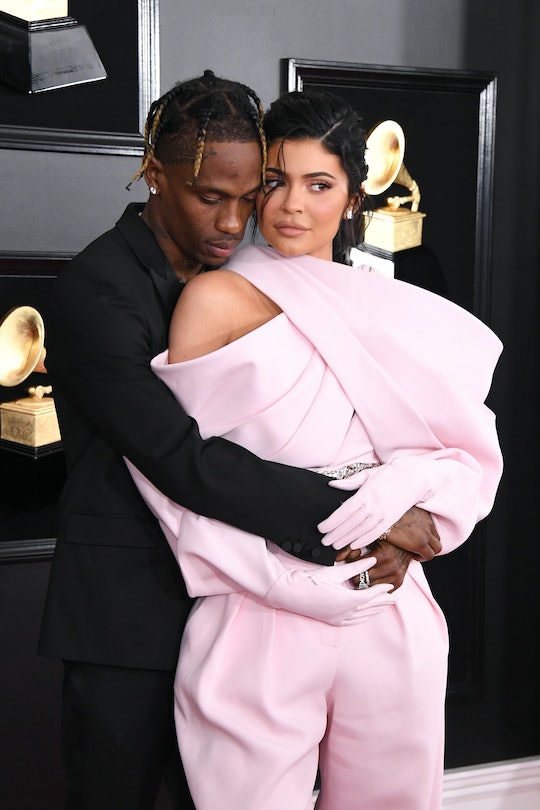 Avengers: Endgame has finally landed in theaters and fans are going all out for screenings of the final film in the anthology. Even celebrities are getting in on the action, dressing up as their favorite characters for the film's premiere and parties celebrating its release. Some went a little further than others when it came to their outfits for the occasion. Indeed, Kylie Jenner's Avengers: Endgame costume with Travis Scott and Stormi is next level, and you've got to see it to believe it.

The reality star posted a photo of herself, her beau, and their daughter dressed as characters from the film on Instagram. Jenner appeared in the photo wearing a Captain Marvel costume, while Scott is dressed as Iron Man. Stormi is not facing the camera in the photo, but appears to be wearing a red cape and something on her arms. The sweet little family appears to be standing before a red Ferrari in the photo, while Jenner looks on adoringly at her man and cradles baby Stormi's head with her hand.

In the photo's caption, the makeup mogul wished fans a "happy end game everyone." Jenner shared another photo of herself and Scott on Instagram, jokingly calling herself "captain lip kit." The couple didn't suit up to sit in the theater with other fans, though; Jenner, Scott and Stormi sported their elaborate Avengers looks to a themed party in the "Sicko Mode" rapper's honor, according to Elle.

Scott's 30th birthday celebration was an over-the-top event, complete with an Avengers cake with replicas of himself, Jenner, and Stormi in costume, balloons, and a private showing of Avengers: Endgame for the whole family, Elle reported.

The custom cake at the party read, "Happy Birthday Husband!" Letter balloons on a wall at the theater spelled out the same message, according to a post on Khloe Kardashian's Instagram Story. The messages, of course, added fuel to rumors Jenner and Scott secretly married, though the rapper denied having secretly married Jenner in an interview with Rolling Stone, he and Jenner continue to refer to one another as "wifey" and "husband."

Jenner and Scott are known to lean in to a pop culture moment. Ahead of the premiere of Game of Thrones on April 14, the "Goosebumps" rapper got into character as a knight, posing for a photo on Instagram, according to Entertainment Tonight.

In the picture, he declared himself from "House of Flame," knighting himself "Son of lord Jacques B Webster the 1st husband of the Goddess K Protector of the Seven Kingdoms." Scott can be seen sporting the costume while standing in front of a grey Bentley. He appears to be in a parking lot, as there are campers and other cars parked around him.

Stormi also gets to join in on her parents' costume fun from time to time. On Halloween, for example, the mother-daughter duo dressed up in matching pink butterfly costumes, which appeared to be an homage to Scott's hit single, "Butterfly Effect," according to Harper's Bazaar. Jenner shared photos of it on Instagram. In the pictures, Jenner could be seen holding her baby girl and smiling at her.

"my baby butterfly..," she captioned one of her Halloween Instagram photos.

Nobody does costumes better than celebs, but the Kardashian-Jenner's are known to go above and beyond for a theme. I'll never be invited to one of the famous family's theme parties, but watching it unfold on Instagram is cool, too. I, like many fans, can't wait to see what costumes they suit up in next.