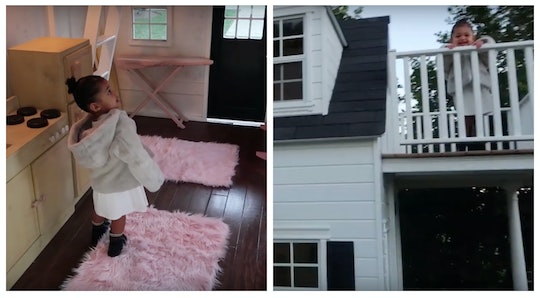 Diabolical grandmother Kris Jenner has outdone us all, gifting granddaughter Stormi Webster a Cape Cod-style mansion that appears to be move-in ready this Christmas. Brilliantly, the house was assembled ("built") on property, making it very difficult for Stormi's mom Kylie Jenner to insist "Stormi can keep it, but it has to stay at your house, Grandma."

Kylie Jenner shared the moment Stormi became a home owner (age: 1 year) on her YouTube channel in a video entitled "My 2019 Christmas Decorations," one of which turned out to be a second home in the backyard. Let's take a tour, shall we?

Featuring abbey-style windows, the two-storey manse appears to be a renovated chapel, with a broad porch and grand colonnades at the front. Area realtor Kris Jenner, seemingly fresh from making a very large batch of peppermint bark, was there to congratulate the sole resident as she entered the premises for the first time.

Inside, the kitchen/living area is furnished with a four-stove gas range, fluffy area sectionals over the original hardwood flooring, and separate ice box/fridge unit. Taking shoes off at the front door optional.

A ladder leads to the loft in the pinnacle of the A-frame, which is larger than a cabin I once Airbnb'd in New Hampshire for somewhere near $200 a night. My parents were there too and had to sleep in twin beds, but acted generally very nice about it.

The nursery is located by the front door, and within a short walk of the kitchen.

In August of this year, LAist made the case for streamlining the approvals process for the development of "accessible building units" in L.A. backyards — granny flats, in other words — to address the homelessness crisis. On any given night, around 59,000 individuals are without a permanent home, per the Los Angeles Homeless Services Authority. So if we could get a few more Cape Cods installed into backyards of Calabasas, we could really make a dent in homelessness.

I think Stormi would agree it's a big idea.

(I wouldn't mind a set of those rugs.)

You can watch the full tour below: