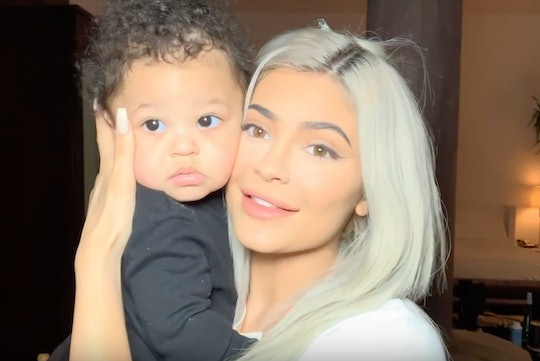 This Adorable Video Proves Baby Stormi Is Already A Fashionista, Just Like Her Mom

Make no mistake about it: the KarJenner ladies are trendsetters and super fashionable. So, it doesn't really come as a surprise that their children also love fashion just as much as they do. Believe it or not, but Kylie Jenner's daughter Stormi is already a fashionista, just like her mom, as evidenced in this adorable Instagram from Tuesday night.

With having such fashionable relatives, it's kind of hard for the newest generation of KarJenner kids to not be into clothes. And 11-month-old Stormi Webster is proving to be the newest converted fashion lover in the family — thanks to the help of her aunt, Kim Kardashian. Kardashian took to her Instagram on Tuesday night to show off eight miniature Louis Vuitton purses. "I got these for all of the baby girls for Christmas from Japan," Kardashian captioned the snapshot.

And these gifts were much appreciated by the recipients, including Stormi. Jenner shared a super adorable video on that same night of Stormi receiving her purse for the first time — and her reaction is absolutely adorable. In the video, Stormi reaches for the purse with the biggest smile on her face. Almost immediately, she puts the purse over her arm and throws the bag over her shoulder, waving goodbye at her mom, behind the camera.

It is quite possibly one of the cutest videos of Stormi ever and shows so much of her personality in just a few seconds.

"Daddy dropped off a new chair for Stormi," Jenner captioned the video. "And OMG, this girl threw the bag over her shoulder I can't." And let's be real, you know Stormi has seen her mom and aunts swing their purses over their shoulders, so she's definitely paying attention.

"She is so adorable and smart," another added.

This probably won't surprise you, but that brand new Louis Vuitton baby purse is quite pricey. In fact, the nano speedy bag (similar to the one that Stormi has) will set you back $1,100.

Stormi isn't the only Kardashian-Jenner grandchild obsessed with clothes, accessories, and makeup. Kardashian's oldest daughter, North West, was designing her own clothes at the age of 3, according to Harper's Bazaar, and inspired her parents to come out with a fashion line called Kids Supply, which debuted in 2017, according to Vogue. Since then, North has showed that her interest is now in makeup, using her mom's face as a canvas from time to time.

But this is in North and Stormi's blood. Aunt Khloé Kardashian has a denim line called Good American, aunt Kendall Jenner is a supermodel, and it's a well known fact that both Kylie and Kim are makeup moguls with their respective lines, Kylie Cosmetics and KKW Beauty.

Needless to say, fashion and beauty is something that these siblings (and their kids) know very well.

And if Stormi wants to pursue a career in fashion or beauty, Jenner has said that she is more than welcome to take over the Kylie Cosmetics empire somewhere down the line. "Maybe one day [I'll] pass this on to Stormi, if she's into it," she told Forbes last year.

Judging from how Stormi put that purse over her shoulder and waved goodbye, it definitely seems as if she's ready to grow up and take on the world with her Louis Vuitton in hand.