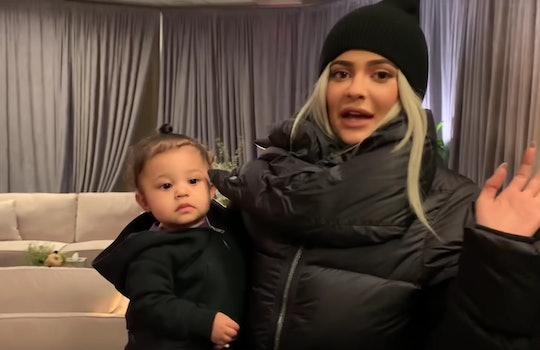 Prepare To Aww, Because Even Kylie Jenner's Daughter Is Mesmerized By 'Barney'

It's been so much fun watching Kylie Jenner's daughter, Stormi, grow up over the past year, thanks to Jenner sharing moments from her daughter's life on Instagram. Fans have seen Stormi develop her own sense of style and interests over time — and now she has a new, serious obsession. It shouldn't come as a surprise to anyone that Stormi is officially a Barney fan — because, like, every kid her age is a fan of Barney & Friends.

There is something about the big purple dinosaur that leaves kids completely enrapt. From his catchy songs to his familiar friends, Barney is so easy to love — which could be why he has a new found fan in Stormi. On Thursday, Jenner took to her Instagram story where she shared that Stormi is now completely taken with Barney.

In the video, Stormi can be seen looking up at her TV, so enrapt with Barney & Friends and what is happening in front of her. But she is doing more than just looking at the TV — she's intently (and intensely) watching it.

"Her first time watching Barney and she loves it," Jenner wrote on the video.

Maybe parents will feel less alone knowing that their kid is not the only one who can watch Barney & Friends and not move for minutes at a time — because Stormi does that, too. Needless to say, Jenner might have created a monster. But, at least Stormi will be learning something by watching Barney & Friends because the show is pretty educational, and teaches kids pretty basic concepts, like cleaning and sharing, according to Common Sense Media.

It's not like watching the TV is something that is completely new to Stormi. She is a huge fan of watching her dad, Travis Scott, perform on TV. Stormi has both watched her dad perform in concert from backstage at his shows and perform at the Super Bowl from the comfort of her home, according to Billboard. In both of these videos, Stormi can be seen giggling along to her father's performances and looking so interested in what is happening on stage.

While Barney might be a little more educational, it's likely that nothing is more entertaining than watching Scott perform.

For now, it seems like Stormi and Barney is sufficient at keeping Jenner occupied — she pretty much has her hands full. Jenner's older sister, Kendall Jenner, confirmed to Ellen Degeneres that Kylie is neither engaged or pregnant, according to People — so wedding planning and a new baby won't be keeping her occupied any time soon. Kendall said, during an appearance on The Ellen Show, according to People:

She's really interesting. I love her. I love her so much. She has a mind of her own. I don't think she's pregnant.

But that doesn't mean that Stormi might not become a big sister one day. "They're practicing. Right? Is that what you call it?," Kendall asked.

While Kylie would probably love to watch another baby grow up in her home, it seems like watching Stormi and Barney & Friends will suffice for now!