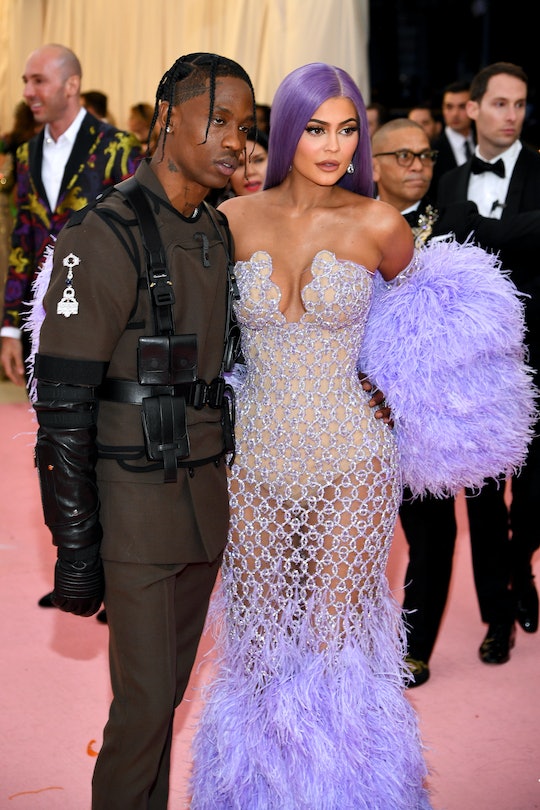 When you think about it, it's kind of shocking just how fast kids grow up, and it feels like celebrity kids do so even faster. That's probably because fans only get a glimpse of them once in a while on social media — one minute they're newborns, the next they're taking their first steps or even talking, like Kylie Jenner's daughter Stormi, who seems to love talking. On Tuesday, Jenner's partner, rapper Travis Scott, shared a brand new video of their daughter just gabbing away and, TBH, it's probably the sweetest thing you'll see all day. Stormi's little voice and sweet toothless smile are almost too much to handle, so be warned: cuteness overload ahead.

On July 16, Scott posted a video of Stormi sitting in his lap chatting away on Instagram. In the clip, he encourages her to "say hi daddy," and the tiny tot happily obliges. She coos at the camera, "hi dad," "hi," and "bye." Scott can be seen smiling proudly while she showed off her verbal skills.

"Only love Us vs The globe," Scott captioned the video, which appears to have been filmed while sitting in a stationary car or plane. Jenner didn't make an appearance in the video, unfortunately, but undoubtedly watched it a million times like the rest of us. And, of course, fans flooded the comments section with positivity, and even a few jokes.

"When is she learning 'Its lit' or 'Straight up,'" one fan commented, referencing Scott's taglines.

"Watched this like 12 times," another wrote, adding hearts and heart-eyed emoji.

This isn't the first time fans have gotten to hear Stormi's adorable voice. Back in March, according to ELLE, Jenner shared an equally sweet video of her and Stormi having a "conversation."

Stormi is definitely the center of attention in her parents' eyes right now, but she may not be an only child for much longer, which means fans could hopefully expect double the cuteness and adorable baby conversations soon. At least, if the speculation is true about Jenner and Scott trying for another baby.

Jenner is apparently "very happy with her life" with Scott and Stormi, according to People, which reported that the makeup mogul is very much looking forward to having another child one day. "Kylie loves being a mom and can't wait to give Stormi a sibling," a source told People. "Everyone thinks Kylie will be pregnant with her second baby soon. They are trying."

Scott himself has said that he and Jenner are on the fast-track to marriage. In an interview with Rolling Stone, in fact, he revealed that they planned to "get married soon," though he didn't say exactly when. "I just gotta sturdy up — I gotta propose in a fire way," he told Rolling Stone.

Whether they're trying for another baby, planning a wedding, or both one thing is for sure: Jenner and Scott have built a beautiful little family together. Hopefully they're enjoying life as a family of three as much as fans have enjoyed getting glimpses into it. And, of course, keep the Stormi content coming  — because she's straight up adorable.