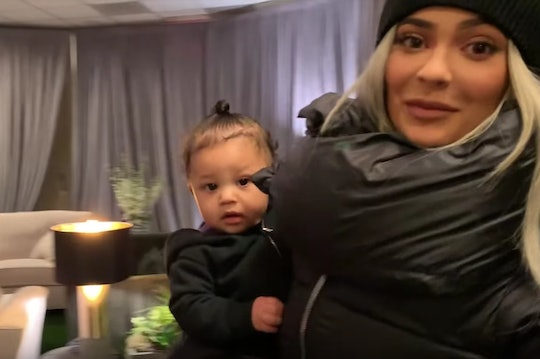 Babies grow up way too fast — especially when those babies grow up in the spotlight. For example, Kylie Jenner and Travis Scott's daughter, Stormi Webster. They've been documenting their daughter's major milestones on social media for the past year, which has been so much fun to watch. So, fans will love that Kylie Jenner's daughter Stormi took her first steps before her first birthday, and it's so cute to see.

In exactly one week, Stormi will turn a year old, which is incredibly hard to believe. And if it's hard for fans to believe that the little girl has grown so much in the past year, imagine how Jenner must feel. There is no doubt that Jenner will go all out for her daughter's first birthday. I mean, she stated all the way back in June that she had already started planning Stormi's first birthday party before she turned six months old, according to People. "I'm already thinking about her first birthday party and how it's going to be epic," Jenner said at the time.

But in the week before Stormi's birthday, Jenner is already celebrating with her little girl for a different reason. On Thursday night, Jenner documented Stormi taking her first few steps (almost unassisted) on her Instagram Story. In the video, Stormi can be seen wearing the cutest little outfit and clinging on to the wall next to her. With the help of Jenner holding onto her wrist, Stormi was able to take her first few steps, all of which Jenner caught on camera.

OK, so maybe Stormi didn't take her first real steps this week, but at least it's a start, right? And at this point, Jenner's will gladly watch the little girl grow up, especially since they've seen so many of her milestones happen on camera.

In the past year, fans have gone from seeing mere glimpses of her face, to seeing her life on tour with her dad this past fall, to hearing her say "Dada" for the first time (adorable), to seeing her look like a little teenager (complete with a Louis Vuitton purse of her own). Needless to say, it has been such a joy to watch Stormi change so much in the past 300 and something days.

Especially since, this time last year, people were very unaware about Stormi's existence. On Feb. 4, 2018, Jenner announced that she not only had been pregnant, but had given birth to a little girl named Stormi on Feb. 1, according to CNN. Fans of Jenner's had been so surprised, especially since she (along with all of her siblings and closest friends) were able to keep it a secret for so long. And because they were so in the dark for so long, it makes sense why her followers want to be a witness to all of these super exciting and important parts of her life.

As previously stated, Jenner is just as happy about these moments. You could hear the excitement in her voice as she talked about Stormi taking her first steps. So, you can imagine just how excited she will be next week when her daughter is finally able to blow out the candles on her first birthday cake.