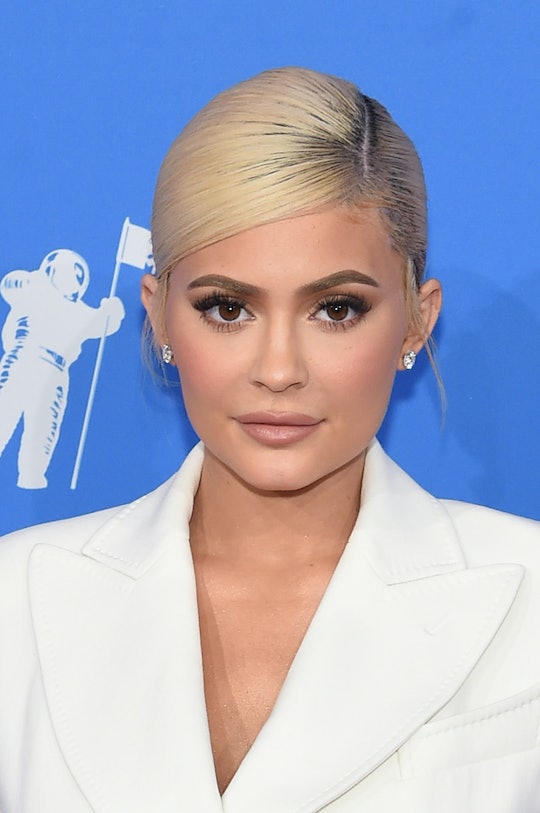 It feels like it was just yesterday that Kylie Jenner's pregnancy was still just a rumor and, to that end, her social media blackout is still very fresh in everyone's memory. But now that she's back in your Instagram feed, it's safe to say that time seriously flies, especially with a cute kid by your side. In fact, Kylie Jenner's daughter Stormi will hit a major milestone before you know it: walking! And just like that, this mama will become the mother of a toddler. Can you believe it?

As you'll recall, when Stormi was born back in February 2017, according to CNN, Jenner was still keeping her pregnancy private until she revealed everything on Super Bowl Sunday of last year. And given her celebrity status, it's certainly understandable that she'd want her privacy, especially considering this was her first baby and this experience was brand new to her.

Well, what a change less than a year makes. Almost eight months after welcoming her baby girl and Jenner seems happily settled into motherhood, and comfortable enough with people knowing about her family life to share lot of fun photos of both her boyfriend, Travis Scott, and Stormi.

The latest phase for Stormi is obviously new, as a new video shared on her Instagram Story on Tuesday shows 8-month-old Stormi in a baby walker getting ready for full mobility.

Just look at her go!

This isn't the first time fans caught wind of Stormi-on-the-move. Last month, Stormi's dad, Travis Scott, shared on his Instagram Story that his little girl was getting ready to stretch her legs.

“We about to be walking soon,” he captioned a photo of himself with adorable Stormi standing on some outdoor furniture with tiny black sneakers.

While Jenner is a first-time mom, she seems so confident in her motherhood and ability to juggle things nowadays. As she told Kim Kardashian when the two sisters talked to each other for the Evening Standard:

I feel like [motherhood has] been so amazing, and so much fun. I’m learning so much more about myself and life, and it’s been such a great experience. Of course there’s hard times and stuff… even in the beginning, just not sleeping, the nights… and all the ups and downs.... I think about her all the time, anywhere I am. I would rather be with her or wish she can come everywhere.

Things aren't just going well for Jenner at home with her daughter and Scott. In case you missed it, Jenner's Kylie Cosmetics brand has become so huge that Forbes magazine named the new mom as en route to becoming the youngest-ever self-made billionaire. (Forbes estimated the brand has made $900 million in three years.)

With every update from Jenner — whether it's about Stormi or her makeup brand — it's nice to see her enjoying every moment of her success as a businesswoman and her life as a new, young mom. The minute a kid starts walking, things really change — parenthood seems to go a little faster. It's any day now that Stormi will be running around and running the show — just like mom.