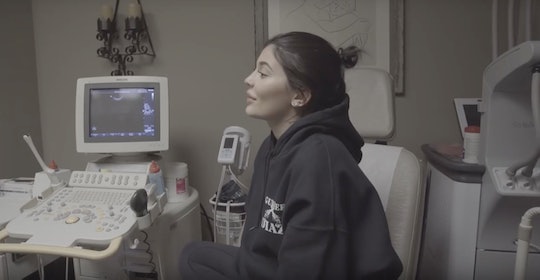 Kylie Jenner's Baby Is The Aquarius Baby That Was Foretold

Aquarius is a sign known for its unpredictability, and Kylie Jenner's baby is Aquarius as hell. The birth, announced on Super Bowl Sunday, now Kylie Jenner Baby Day, took place on Feb. 1, 2018, to the delight of the entire Kardashian clan. That puts it in the middle of the Aquarius celestial phase, squarely in the realm of the fickle and ever-changing air element — an atmospheric sign that can flip the world around and is known for its progressiveness, independence, and originality.

Jenner seemed to have a sense for the fiercely independent horoscope of her future child, keeping the pregnancy under wraps, and writing, in her eventual announcement:

pregnancy has been one of the most beautiful, empowering, and life changing experience (sic) I've had in my entire life and I'm actually going to miss it.

Given the flair for announcing their pregnancies (Khloé Kardashian), and decision to be so open about her journey using a surrogate (Kim Kardashian), Kylie's decision to remain mum throughout her 40-or-so-week pregnancy journey has certainly imbued her daughter with originality, independence, and progressiveness from the outset.

As the site Astrology Zodiac Signs puts it, "Although they can easily adapt to the energy that surrounds them, Aquarius-born have a deep need to be some time alone and away from everything, in order to restore power." And if that doesn't sum up the nesting instincts of both the baby, deep in her womb, and Kylie herself through a ten-month pregnancy that was kept entirely out of the public eye, I don't know what does.

If you want a zodiac-based guess as to which aunt Kylie's daughter will be closest to, Kim Kardashian is a Libran — also an air sign, and therefore likely to get along well with a similarly attuned K-baby. For her own part, Kylie Jenner is a Leo — a fire sign — which suggests she will be an especially protective mother, and willing to fight for her child's rights.

Uranus rules over Aquarius, giving Aquarians a visionary quality. You could argue that all the Kardashians are visionary, right from Rob Kardashian's taste for celebrity justice to Kim's early hop onto the skincare and beauty train, but I'm willing to hand the crown for "MOST VISIONARY" to Kris Jenner, whose idea it probably was to keep this pregnancy under wraps for so long (I'm kidding, or am I? FWIW, Kris Jenner is a Scorpio, and that zappy stinger is not the worst imagery for the fierce matriarch of the K clan).

According to the website Mom 365, Aquarius babies can be a bit stubborn, getting frustrated when things don't go their way. They can also be a roller-coaster of emotion, but then again, ISN'T THAT ALL OF US ON THIS, THE DAY KYLIE JENNER'S BABY MATERIALIZED OUT OF THIN AIR?

This baby will also be a people person, which is great, because she already has about a bazillion cousins and aunties, according to Kylie Jenner's birth announcement video.

The one thing we know for sure is that proud mom Kylie Jenner felt that this baby was destined, and she didn't want to mess with the universe in the lead-up.

And I'd say that the cosmos let her have her way.