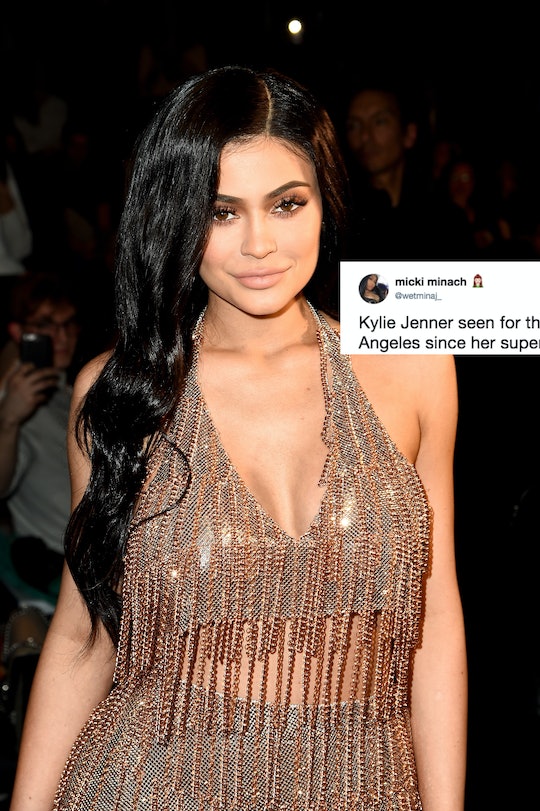 Kylie Jenner flew pretty far under the radar for the past nine months, enjoying her pregnancy out of the public eye. Since the arrival of baby Stormi on Feb. 1, she has made her way back onto social media (bless) and is now being photographed by the paparazzi, as well. After months of secrecy and rumors, Jenner's first photos after the birth of her daughter are here, and people are already shaming her for her body and her parenting. Apparently, not even new moms get a break from the internet trolls.

Jenner gave birth to daughter Stormi on Feb. 1, 2018, breaking the internet with the announcement of her new arrival. Despite raging rumors throughout her pregnancy, Jenner kept official comment out of it. That was until her Feb. 4 post announcing the birth of her daughter, and the subsequent post on Feb. 6, announcing her daughter's name, Stormi Webster. Now, slowly returning back into the spotlight, Jenner is returning to Twitter and being caught in public by paparazzi. Never mind that the idea of photographers following you is already an invasion of privacy, but the comments that some already have about her body and parenting attached to the photos are truly awful.

One commenter was quick to criticize Jenner's postpartum body, with a terrible comment regarding the fanny pack she was wearing.

Trying to cover her FUPA with a fanny pack is hilarious.

Another accused her of getting plastic surgery and, once again, went after the fanny pack:

Nothing like a fanny pack and going straight from the delivery to a liposuction session to hide, and get rid of, the kangaroo pouch.

And yet another body-shamer went after the new mom for *God forbid* having gained weight during her pregnancy:

She looks like she just had a baby - she’s chubby. She might choose an outfit that doesn’t include a crop top and biker shorts.

Not all of the comments were in reference to Jenner's body, though. Some commenters were low enough to go after her child. One wrote:

Her and her child likely had liposuction within 24 hours of her hatching the little half-colored critter.

Another popular topic for criticism was Jenner's parenting. Baby Stormi was left out of these particular paparazzi shots, so people naturally assumed that this meant Jenner left her baby behind somewhere.

She looks like a 20 year old that had a baby. Cell Phone and no baby around, in addition.

Unfortunately, Jenner is no stranger to shaming. When reports of her pregnancy first broke, people were quick to comment on her age, her marital status, and anything else that could find to criticize. The TMZ article reporting the pregnancy rumor racked up a slew of nasty comments on all of the above. One commenter made it a race issue somehow, saying:

Black guys are the only ones that can get it up for those fat azz, wide hip, ugly face hoes.

Another went after her for not being married to boyfriend Travis Scott, deeming her a bad influence on other girls:

OK she's pregnant and not married. Please don't tell impressionable teens because they will think that behavior is wonderful. Immorality is not something to be copied.

The criticism wasn't isolated to news articles on her then-rumored pregnancy, though. There were plenty of nasty comments popping up on Twitter, as well. Many users were apparently outraged at her young age, while others shamed her for "not using birth control." Of course, if and how she practiced safe sex is no one's business, but that hasn't stopped the internet before.

Of course, online strangers weren't the only ones to come after Jenner when rumors of her pregnancy were going around. Talkshow host Wendy Williams threw her two cents of shaming in, too. Along with a rumored child together, Jenner and Scott were also in the news for reportedly splitting up. During her discussion of the rumors, Williams made a number of nasty comments; not least of which was in regard to Jenner's relationship status.

After posing the question of why Jenner had yet to confirm the rumored pregnancy, Williams launched into a monologue of meanness:

Well, why do you think? I guessed right away: because she's not with Travis Scott anymore. Please, that was a split and run, in my mind. Like, the condom split, she took the test and was probably like, "Oh my god, what do I do now? Travis!" He's like, "No, I'm a rock star. You got plenty of money on your own, figure it out ... I'll pay child support from afar."

Williams also went after Jenner's age, saying, "She's only 20, you know what I mean. Remember when you were 20, you didn't want anything to do with a baby," and suggested that her baby would "need a lip kit."

Hopefully, Jenner is too busy basking in that delicious newborn baby smell and enjoying motherhood to notice all of the ugly floating around online. It would be such a shame to have that special time tainted by a bunch of trolls. Don't let the haters get you down, Kylie.