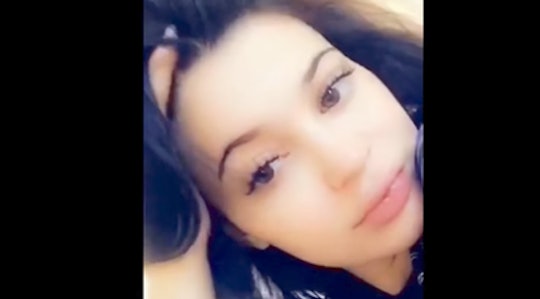 No, Kylie Jenner’s Drastic Haircut Isn’t Her "Getting Ready For Motherhood"

Kylie Jenner is the queen of changing up her look. From her iconic hair styles (who can forget the amazing turquoise hair extensions?) to her lips and lipstick shades, Jenner knows how to have fun with her appearance. But to some fans, changing your look means changing who you are as a person. Amidst everything going on in the 20-year-old reality star's life (ahem, a reported and unconfirmed pregnancy), fans are clearly tired of her teasing them with new updates that are unrelated to exactly that. This could be why people have a lot to say about Kylie Jenner's new haircut, but it's honestly a bit much and really unfair.

In September, TMZ reported that Jenner was expecting her first child with boyfriend, rapper Travis Scott. But Jenner has never confirmed or denied the news, and instead has been distracting fans with other things, like this new haircut.

Jenner debuted the new, cropped haircut on her Snapchat over Thanksgiving weekend to the delight (and anger) of her fans. In the video from her Snapchat, Jenner is seen running her fingers through her hair while looking into the camera. "Cut off all my hair again," Jenner captioned the video, which is of course taken from the chest up so people can focus on her new haircut and not, you know, the fact that she may or may not be pregnant.

But fans took to social media to comment on both of those things — how (somehow) the Snapchat hints that she is pregnant and how unremarkable her new haircut is. But all of it is a bit much.

"Is that a errr pregnancy haircut," one commenter on Cosmopolitan's Facebook page asked.

"I know when I was pregnant I had to cut my hair because I was so hot all the time I couldn't deal with it long! Just saying!" another commenter wrote on Perez Hilton's Facebook page.

Some even went as far as to blame the "hormones" on her decision to cut her hair, as one reader commented on Us Weekly's Facebook page. Celebrity blogger Perez Hilton even blamed "maternity brain" for Jenner's new look.

...Meanwhile, Others Made Some *Bizarre* Assumptions About Her New Look

Of Course, Some Did Just Comment On Her New 'Do (Although Not Everyone Was Entertained)

Earlier in the week, Jenner documented that she let her best friend, Jordyn Woods, cut her hair on Snapchat. "Jordyn's cutting my hair with kitchen scissors," Jenner told her fans, according to Allure. That is a lot of trust to put in one person, especially your best friend. But it's Jenner we're talking about, and if anyone can pull of a hair style cut with kitchen scissors, it's her.

The comments about her hair are just a little bizarre, not only for how much they vary — from people being angry with the haircut to enjoying it — and their speculation on top of it. Sometimes, a haircut is just a haircut.

But having shorter hair doesn't have to mean that Jenner is "getting ready for motherhood" and blaming her decision to chop off her long locks on her "hormones" is completely unfair. Yes, the stereotypical "mom haircut" is a low-maintenance style, meant for moms to spend less time focusing on getting ready and spending more time with their kids. But has not even welcomed this alleged baby-to-be yet and moms face enough judgement for their looks as it is. Whether it be for their pants (thank goodness "mom jeans" are trendy) or their weight (not being skinny enough or being too skinny), the last thing they need is for there to be a stigma surrounding the fact that a shorter haircut somehow means someone is becoming a mother. Moms come in all different shapes and sizes — there isn't a typical "mom haircut" just like there isn't a typical mom.

In spite of what some people seem to think, this new hair style does not, by any means, provide any sort of evidence that Jenner might be expecting her first child. This new batch of totally unrelated videos could be because Jenner is having fun with her fans speculating whether she's actually pregnant. A source told People last week that Jenner is only trusting her closest friends with the information. "She wants to reveal things on her own terms, but she's of course, having fun teasing everyone," the source said. "She knows all the attention is on her and her baby bump, but she won't share until she wants to."

Jenner's reported pregnancy might be driving people wild, but at least they have this haircut to focus on in the meantime. Or not, because yeah, it's just a haircut.