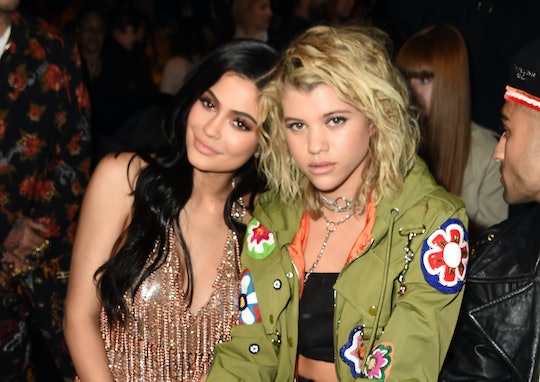 If you're a fan of Handmaid's Tale (and even if you're not), you probably know the plot involves a dystopian society that strips women of their fundamental rights as humans. In what was once the U.S. — but is now Gilead — handmaids are forced to conceive and carry children for high-ranking couples having trouble conceiving. After each baby is born, the child is taken away from the mother and is raised by elite family. The handmaid then repeats this process with another family. It's pretty horrific, honestly. With that said, it's not surprising Kylie Jenner's Handmaid's Tale-themed party and the partygoers' costumes have sparked some backlash online.

As an avid fan of Handmaid's Tale, I completely understand being infatuated with the Margaret Atwood-inspired series. As terrifying as the plight of June and the rest of the handmaids is, it's impossible look away. Not to mention, the plot eerily hits home in the wake of our government attempting to legislate women's bodies and reproductive rights.

It makes sense that protestors dressed as handmaids have shown up at the Women's March, the Brett Kavanaugh hearing, whenever abortion bans are in the works, and more. Handmaids are a symbol of oppression — a reminder that we are teetering on the edge of a similar totalitarian state by rendering women powerless over their bodily autonomy.

So you can probably imagine the reaction when Kylie Jenner and Scott Disick’s girlfriend, Sofia Richie, started sharing photos from a Handmaid's Tale-themed birthday party.

Romper's request for comment from Jenner's reps regarding the backlash was not immediately returned.

The Handmaid's Tale party was reportedly thrown by Jenner — and held at her Hidden Hills home — on Saturday, June 8, according to Us Weekly. (It was a celebration for Jenner's longtime friend Anastasia "Stassi" Karanikolaou's 22nd birthday, E! News reported.)

In addition to Gilead flag decorations and handmaid costumes for guests, there was also "praise be" vodka and "under his eye" tequila, according to Jenner's Instagram Story.

And the table adorned with black candles and roses...

And there many selfies of the guests in their handmaid costumes.

As People reported, Richie posted a series of photos to Instagram showing her handmaid "transformation," writing, "Tonight transition was serious.. praise be."

It looked like the partygoers had a great time. However, some people on Twitter were understandably upset about the whole shebang.

One Twitter user wrote, "Kylie Jenner is having a party themed after the Handmaid’s Tale.....so.....who’s gonna tell her that her party is literally celebrating female enslavement for their biological reproduction?? WHO IS GOING TO TELL HER."

Another person tweeted, "Why is Kylie Jenner throwing a PARTY with women dressing up as the sex slaves from The Handmaid's Tale," alongside upside-down smiling emojis.

Yet another person chimed in with, "Kylie Jenner throwing her friend a Handmaid’s Tale themed birthday party complete with robes, Gilead flags, 'Praised be' vodka and 'Under his eye' tequila is so tone deaf, at any time, but especially when women’s rights and autonomy are particularly under attack. Disheartening."

*Sigh* Remember that "sexy handmaid" halloween costume that popped up ahead of Halloween last year? I'm getting the same unpleasant feeling after looking at the photos from Kylie Jenner's party. Because dressing up as a handmaid to protest oppressive government action is one thing. But parading around taking fun and sexy handmaid selfies while drinking "praise be vodka"? As many expressed on social media, it feels very tone deaf.