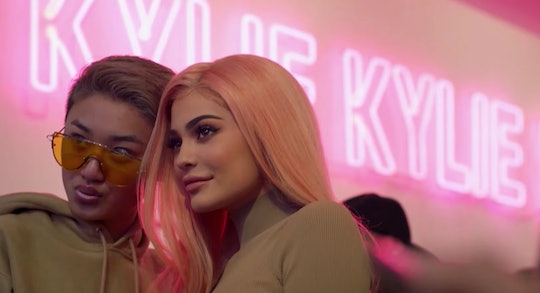 Just because Kylie Jenner is a mom doesn't change anything about her life. Sure, she kept her pregnancy a secret and spent much of the time off of social media. And yes, now that she's a mom, she's slowly made her return to her pre-baby life of selfie taking and enjoying herself as a 20-year-old. Her life hasn't changed with the exception of something huge — she's a mom to a young daughter. Of course, Jenner recognizes this, and Jenner's Instagram of her new pink hair has the best caption ever for a very obvious reason.

Being a mom is all about balance — and Jenner has made this very clear from the start. On her social media she has showed that she is more than capable of caring for her 2-month-old daughter, Stormi Webster, while showing people that she is still very much a 20-year-old who is going to hang out with her friends (like her bestie, Jordyn Woods), post selfies of herself to Instagram, and experiment with her look a little bit.

On Friday, Jenner debuted a new look on Instagram to remind people about this — just because she's a mom doesn't mean she can't play around with her look. Her bright pink hair stands out amongst the other photos of herself on her Instagram (it's bright y'all) and the most fitting caption, ever. "I'm not a regular mom," Jenner captioned the photo. "I'm a cool mom." Can you guess what movie that line is from?

If you guessed Mean Girls, then you're absolutely right. Jenner's caption refers to the quote that queen bee, Regina George's mom (played by a hilarious Amy Poehler), says to her daughter and her friends in their home. Could this be hinting at what Jenner might be like when Stormi gets a bit older? Or refer to the fact that her pink hair makes her cool? True fans know that in true Mean Girls fashion, Jenner's photo really should have been posted on Wednesday (because on Wednesday's they wear pink).

This isn't the first time that Jenner has dyed her hair or switched up her look — she's a makeup mogul, after all, and has fun playing around with the way she looks. It should be expected that motherhood wouldn't change this and the fact that Jenner has decided to express herself with her hair, even as a mother, is pretty awesome of her.

Jenner has dyed her hair to every color of the rainbow, according to People, picking cherry red locks to a deep midnight blue hue. She loves coloring her hair so much, she even decided to rock teal-colored tips to her older sister, Kim Kardashian's wedding (Kardashian reportedly was not happy with that, according to Hollywood Life, expressing her distaste on Keeping Up With the Kardashians). This definitely isn't the first time that Jenner has decided to go with pink colored hair, either. While Jenner's hair transformations aren't that surprising to fans (and this new one shouldn't be any different), fans of Jenner's E! reality show, Life of Kylie, might be a little surprised since Jenner stated she was "done" with changing her hair color, according to Us Weekly. "I'm over it," Jenner said, according to Us Weekly. "I'm over keeping up with this lifestyle and crazy wigs and s—."

But her new look could be inspired by her older sister, Kim Kardashian, too — who has proven that being a mom (especially a mom to three) can be cool. In February, according to Allure, Kardashian debuted cotton candy colored hair, which could have inspired Jenner. It's not as bright as Jenner's but proves that being a mom doesn't mean you have to stop having fun with your look, too.

Pink hair or not, it's pretty much assured that Jenner will be the coolest mom in Stormi's class while she is growing up.