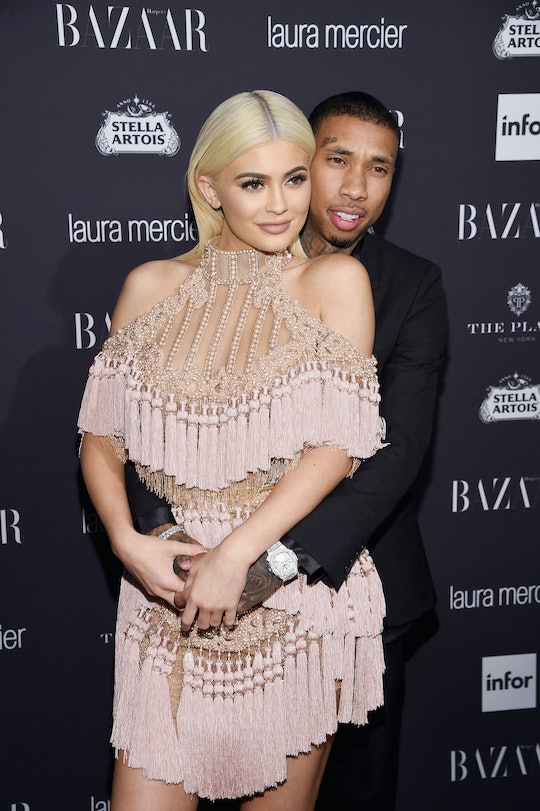 OMG, This News About Kylie Jenner's & Khloe Kardashian's Exes Is So Bizarre

Let's face it: The act of keeping up with the Kardashians has never been easy. Between the ever-evolving family and relationship drama, something about the Kar-Jenner's dynamic is always changing. Every time fans turn around, it seems like there's always some new breakup, new baby, or scandal. However, it looks like things just got even more baffling. Because apparently, Kylie Jenner's and Khloe Kardashian's exes are linked in the most confusing way.

So here's the scoop: TMZ recently dug up court records showing that Tyga — who dated Kylie Jenner— and Jordan Craig — who has a 2-year-old son, Prince, with Khloé Kardashian's ex, Tristan Thompson — were once married. Tyga and Craig reportedly tied the knot on Sept. 6, 2010, and then filed for divorce one month later, according to TMZ. As if this weren't mind-boggling enough, Tyga also has a child (a son named King) with Blac Chyna — who shares her daughter, Dream, with Rob Kardashian. Mind = blown.

Oh, and did I mention that Khloé, Kylie, and Rob are all siblings? And that Tristan Thompson reportedly cheated on Khloé with Klyies former BFF, Jordyn Woods. Are you confused yet? Because my head is spinning.

Even if you weren't able to keep up with that tangled web of relationships, you have to admit: The fact that Tyga and Craig were once married means the Kar-Jenner relationship tree just got even more complicated. Twitter definitely seems overwhelmed by it all.

Another Instagram user wrote, "What the hell is this? 6 degrees of Kardashian?"

Yet another person commented, "My mind is blown.m I didn’t think their family tree could get more tangled lol."

Another Twitter user pointed out, "Talk about keeping it in the family...."

Interestingly, Blac Chyna recently opened up about her relationships with Rob Kardashian and Tyga during a May 15 appearance on The Wendy Williams Show. “I thought you were using him to get back at the whole family,” Wendy Williams said to Chyna during her talk show, according to Us Weekly. “Get back at them by getting their most vulnerable asset, which is Rob. He let himself go, didn’t care about himself and along came you.”

“No, no it didn’t happen that way," Chyna insisted, going on to explain that Tyga had actually kicked her out of his house in order to pursue a relationship with Kylie Jenner. It was Rob who started sending messages to her before the pair met and then became an item. Later on during the interview Chyna revealed who was the better lover out of the two: Rob Kardashian.

Look, absolutely no judgement, here. And this is only a suggestion, but perhaps the Kar-Jenners might consider broadening their dating pool a bit? Granted, Kylie seems to be in a solid relationship with Travis Scott, the father of her daughter, Stormi Webster. But I would love to see both Khloé and Rob find awesome partners the next time around — without the awkwardness of dating each others' partners' exes.

And hey — at the very least, it would make "keeping up" with them a tad easier for fans!