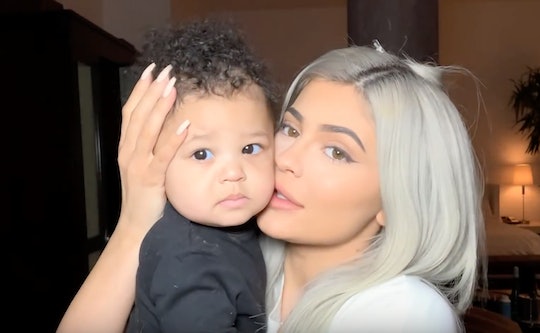 Everyone is well aware that Kylie Jenner's 1-year-old daughter, Stormi, is all kinds of adorable. The little girl seems to get cuter and cuter every single time Jenner posts about her. So, it shouldn't come as a surprise that Kylie Jenner's precious new photos of Stormi are giving her friends baby fever.

Jenner took to Instagram on Thursday to share photos of her daughter and boyfriend, Travis Scott, from a recent family outing. In the photos, Stormi can be seen sitting in Scott's arms, drinking from a water bottle, and wearing the sweetest little hat. In a video in the post, Stormi laughs at her dad and pats his back in the most adorable way. The entire post captures a very sweet family moment, showing the Jenner-Scott family is such a normal and simple moment together.

"We took our baby on an adventure yesterday," Jenner wrote in the caption of the post. "Ugh I love this little girl so much. Not only do I think she's the cutest thing in the world...she's got the sweetest, smartest, most special little soul. P.S. The pat on the back at the end of this video gets me every time."

Jenner isn't the only person who can't get enough of Stormi; her friends are loving these photos, too. As soon as she posted these photos, her friends immediately took to the comments to fawn over how sweet Stormi is.

"You guys are the cutest ever," Khloé Kardashian observed.

"My baby fever after this is on overload," Kendall Jenner added.

You really can't blame them for feeling this way. Stormi has shown everyone time and time again that she is one adorable little kid. Stormi seems like such a sweet little girl in every single video that Kylie posts of her — she is well mannered and knows her ABC's, according to People. It's impossible to not get baby fever after watching Stormi be so sweet.

Whether Bieber and Jenner's sister will act on their baby fever remains unclear, but it seems that Stormi has them wanting a kid of their own. In November 2018, Bieber, for her part, told Vogue Arabia that she and her husband, pop star, Justin Bieber, won't be having kids "any time soon," according to Cosmopolitan. But that doesn't mean that Hailey isn't ready to start a family at all. "I love kids and can't wait to have my own," Hailey told the magazine. "I would say now that's a closer reality."

And Kendall Jenner is just enjoying being an aunt to Stormi for the time being. In May, Kendall told E! News that she thinks children can be a little much for her. "Most of the days, I'm like 'This is too much.' It's a lot to be able to play with them," she said. "I'll just be like, 'Go to your mom.'" As the only member of the Kardashian-Jenner family without kids, it's safe to say that Kendall can get her kid-fill elsewhere, and isn't in a rush to have kids of her own.

Until the moment for motherhood strikes, both Hailey and Kendall can just hang out with Kylie and Stormi until their baby fever subsides.