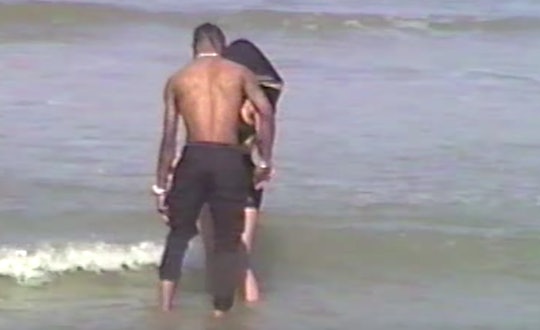 Kylie Jenner and Travis Scott's relationship is something that both of them keep to themselves — and you really can't blame them for it, especially after their daughter, Stormi Webster, was born in early February. What goes on in their personal lives shouldn't have to be public knowledge, even if they are incredibly popular celebrities. So while they do tend to keep most things to themselves, there do share some special moments with their fans, like birthdays and anniversaries. And Kylie Jenner's photo for Travis Scott's birthdayshows just how happy the new parents are together.

Really, you can't blame Jenner for wanting to keep their relationship to themselves. Before Jenner got pregnant, they wouldn't even confirm that they were dating, according to Cosmopolitan. But since Stormi's birth, the couple has made it clear that they are not only together, but they are loving life as parents to their baby girl.

Jenner made this even more clear on Tuesday when she posted the cutest photo of her and Scott, looking so blissfully happy. In the photo, Scott and Jenner embraced on a beach. The caption? A simple present emoji — which can really have a few different meanings.

It is likely that the present emoji in Jenner's caption is referring to Scott's birthday, which was on Monday, one day before Jenner posted the photo. On April 30, Scott celebrated his 26th birthday, according to People, which Scott acknowledged on Twitter in a super sweet tweet. "Thank you mama and God for bringing me in this world today," Scott tweeted.

But the present could also be referring to the fact that this time of year reportedly celebrates when Scott and Jenner first got together and started dating. Scott and Jenner were first seen together at the music festival, Coachella, at the beginning of last April, according to People. Later that month, they made their first public appearances together — and by June, it was clear that something was going on between the couple, according to People. So this is probably around the time of their one year anniversary, according to Elle. With her recent Instagram post, Jenner could just be referring to the fact that Scott's presence in her life is a gift or that his love is a gift to her.

This certainly isn't the first time in the past few days that Jenner has shown her appreciation for Scott. Over the weekend, Jenner rented out a Six Flags theme park and turned it into the Houston theme park, Astroworld, just for Scott, according to Fader. Jenner ended the night with an even sweeter surprise — a birthday cake with an edible version of their family riding a roller coaster (complete with Stormi and her purple pacifier). If you've ever had any doubts about the status of Scott and Jenner's relationship, then Scott's birthday celebration (and his super cute birthday cake) should definitely prove you wrong.

All these posts should pretty much confirm that the couple is doing incredibly well. Especially since, according to People, Scott has "been going the extra mile" for Jenner and their family. A source told People on Monday:

Kylie and Travis are doing well. They are a great family. Kylie is very in love with Travis. He is an amazing dad and loves spending time with their daughter. He has very much stepped up.

If this is the case, then it is clear that Jenner has noticed it, too — which makes her newest Instagram post even sweeter. Seriously, Scott and Jenner's relationship really does give #relationshipgoals a new meaning.