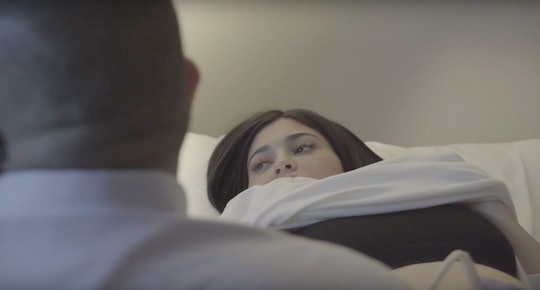 Here's Everything You Needed To Know About Kylie Jenner's Pregnancy, In One Video

After months and months of waiting and speculating, on Sunday, fans finally got an answer. Kylie Jenner was pregnant and did indeed give birth to a healthy baby girl on Thursday. But on Sunday, she released a video to explain everything, and Jenner's pregnancy video will give fans every answer they had about her pregnancy.

Stop everything that you are doing to watch the 11-minute-long video, because every second is worth seeing. If you've ever had any question about Kylie's pregnancy, then this video does a perfect job at answering it.

The video starts out with Kylie herself being being born, and brings fans along through the journey of her relationship with the baby's father and Kylie's boyfriend, Travis Scott. Kylie's best friend, Jordyn Woods narrates the entire video and explains to Kylie's daughter, born on Feb. 1, how she came to be and how Woods found out about her. Woods said:

Your mother and I, we were living our lives, having fun, she met your father and they just hit it off. Chemistry. One day I was in your mom's bathroom with her and she took a little test. And then she passed it to me after, like, "surprise."

From then on, the video shows every stage of Kylie's pregnancy — from her anatomy scan, to announcing the pregnancy to her family, to her baby being born. The video is so beautiful, every second of the way.

This video clears up any and every question that fans might have had since TMZ first reported on Sept. 22 that Kylie was expecting her first child with Scott. After the news broke, Kylie retreated out of the spotlight completely, rarely posting photos on Instagram, tweeting things, and refraining from making public appearances. Heck, she was so secretive about her pregnancy that she didn't even appear in her family's Christmas card in 2017.

But this was because Kylie wanted to keep something to herself for one of the first times, ever for the sake of herself and the health of her baby. Kylie took to Instagram on Sunday to explain her absence.

How She Found Out

As Woods stated in the beginning of the video, Kylie was in the bathroom with Woods when she found out and it sounds like she was pretty calm. Since Kylie's baby was born on Feb. 1, it is likely that Kylie took this test nine months before February, in May or June. So yeah, Kylie was pregnant all throughout the summer with no one finding out.

In the video, Kylie's doctor explained to her that she had gained 20 pounds over the course of her pregnancy. "If you're going to eat, you need to exercise," her doctor told her. "It's just that In-N-Out these days literally tastes like the best thing ever," Kylie replied.

Kylie then can be seen ordering and eating a double cheeseburger with fries well done (and contemplates ordering cheese fries for a few seconds). Later on in the video, Kylie is seen eating two burgers and two kinds of fries (her baby really liked sweet potato fries, she explained). This shows that Kylie was definitely not immune to the crazy pregnancy cravings throughout the 40 weeks of her pregnancy.

Although people had speculated for months about the sex of Kylie's baby, it was revealed in the video that she knew the baby would be a girl pretty early on in the pregnancy. This means, of course, Kylie's baby shower was drenched in pink. Kylie's guests can be seen wearing the same cream-colored satin pajamas and decorating onesies fit for a baby girl. Kylie's friends even joked about how her daughter would be able to "beat her face" and carve out eyebrows" (that's not about violence, it's about makeup) at the age of 5.

Her Relationship With Travis Scott

Although throughout Kylie's pregnancy, people had speculated that Scott was no longer in Jenner's life, her pregnancy video shows just the opposite. Throughout the entire video and the course of Kylie's pregnancy, Scott was there every single step of the way. In the video, Kylie hangs out with Scott's family and updates them about the baby's progress. The video shows that Scott was even in the delivery room when Kylie gave birth and he looks so excited about the baby's arrival. Needless to say, Kylie and Scott are going strong and the camera captures little moments of them looking so in love and so excited to bring their baby into the world.

No, She Wasn't A Surrogate For Kim Kardashian

While some people might have speculated that Kylie was actually Kardashian's surrogate for her newest daughter, Chicago West, the video dispels that rumor completely. In the video, Kylie tells the camera that Kardashian's surrogate is due 4 weeks before her and even captures the meeting between Kylie and Chicago. "I need to school you on what your vagina is about to feel like," Kardashian tells Kylie. Spoken like a true older sister.