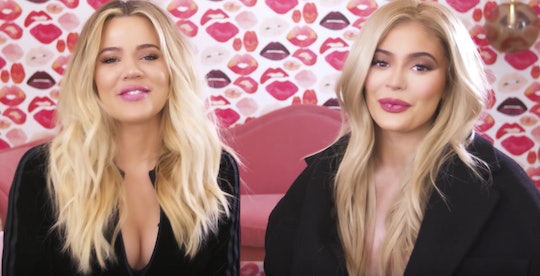 Kylie Responds To Khloé's Pregnancy Reveal, But Not In The Way You'd Think

On Wednesday afternoon, Khloé Kardashian confirmed that she is, indeed, expecting her first child with boyfriend Tristan Thompson. Needless to say, Khloé's fans freaked out. But Khloé's fans weren't the only ones who were super excited for the couple — younger sister, Kylie Jenner was, too. And Kylie Jenner's reaction to Khloé Kardashian's baby news is super subdued and simple.

Khloé announced her pregnancy on the one social media app that practically everyone is glued to — Instagram — sharing a black and white photo of her bump with her boyfriend's hands wrapped around it. In the photo's caption, Khloé calls the pregnancy (which is her first), "the greatest dream ever realized." Khloé wrote in the photo's caption:

I had been waiting and wondering but God had a plan all along. He knew what He was doing. I simply had to trust in him and be patient.

In the caption, Khloé also made a point to thank fans for their patience because she had been keeping her pregnancy quiet just so that she and Thompson could enjoy it between friends and family. Needless to say, Jenner had known about the news long before Khloé announced it on Wednesday — so there is no telling what her initial reaction was to the news.

Family members are already publicly reacting to the news. Including Jenner herself liked the Instagram photo shortly after it was posted. Mom Kris Jenner and sister Kendall Jenner have already commented hearts on Khloé's photo, showing that the family cannot get enough of the news.

Other than that, there is nothing to note; Kylie has been silent on her own Snapchat, Instagram, and Twitter accounts, failing to comment or say anything more about her sister's pregnancy. And for the past few weeks, most of her social media posts have been focused on her makeup line, Kylie Cosmetics. But who could blame her for keeping her silence? Now that Khloé has come out and confirmed the news, everyone will be glued to Kylie's every move.

In September, it was reported that Kylie was expecting her first child with boyfriend Travis Scott. Just a few days later, the news of Khloé's pregnancy was made public. Until today, no one was 100 percent certain that either Khloé or Kylie were really pregnant. And with Khloé's news confirmed, everyone is now looking to Kylie to make an announcement of her own. People on Twitter want Kylie to follow suit, like, ASAP.

Some people think that Kylie's pregnancy will be announced in the next few days through the Kardashian Christmas card, but only time will tell if that will actually happen.

Until Kylie confirms the news or comments on her sister's photo, people will just have to be content with Khloé's huge announcement. Lord knows that Kris is already so excited. During a Thanksgiving special episode of Keeping Up With The Kardashians, Kris said, according to Bravo:

I used to pray that one of you guys would have a baby and now it's like a faucet that won't turn off. The fact that I have all of these grandchildren, it's been the most amazing journey to watch your kids because it's truly the meaning of, just, life.