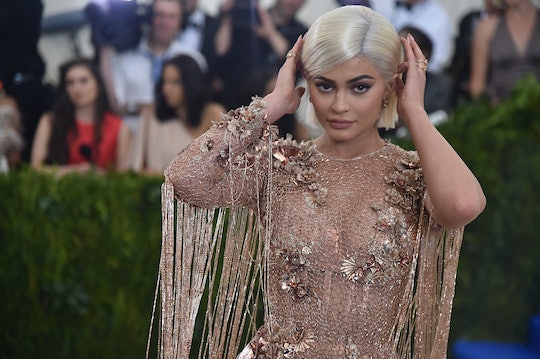 Since it was reported on Friday that Kylie Jenner has a baby on the way, fans have been scouring her social media accounts for clues that the 20-year-old reality star is really pregnant. Jenner hasn't confirmed anything yet, but in the following days, she's posted some new photos, including a throwback picture on Monday that immediately sparked speculation. While people are dying to know what is going here, Jenner's "throwback" Instagram photo doesn't owe fans any explanation — she can address these rumors on her own timeline.

People reported the news of Jenner's pregnancy after confirmation from multiple sources. The article, which of course immediately blew up online, reported that Jenner was expecting a baby girl with boyfriend Travis Scott, and that she was due in February. Romper has reached out to representatives for both Jenner and Scott, but has not heard back at this time.

By all accounts, Jenner is over-the-moon about the news, with a source telling People, "It is an unexpected but completely amazing turn of events that she could not be more excited or thrilled about."

But just because she's excited to be expecting doesn't mean that she was necessarily ready to go public when the news broke. Another source told People that Jenner was "worried" that people would find out before she wanted them to, so she "started posting old photos of herself on social media" that showed off her flat stomach.

Monday's throwback photo would certainly fall into the "showing off her flat stomach" category.

Now that the world knows about the reported pregnancy, though, it seems likely that this latest throwback is less of a ruse than it is about her having a little bit of fun. That's awesome, because when it comes to sharing the news of her pregnancy, Jenner should be able to do whatever she wants.

She never wants to confirm she's having a baby until months after the child is born? She should go for it. She wants to put every single detail about the way her body is changing on Instagram starting tomorrow? Live your life, Kylie. She wants to keep posting cryptic pictures that would seem totally normal at any other time in the news cycle, maybe to whip up speculation, maybe not? That's totally cool too. She wants to take her boyfriend and her doctor to a remote mountaintop village and live there for the rest of her life, herding goats and growing lemons? Unlikely, but you know, she'd have my full support.

Deciding how open to be about your pregnancy is a completely personal decision. The importance of information control is only magnified when you're a household name, and tabloids are salivating for every single detail. Jenner got used to a life in the spotlight at a young age, but she may not necessarily want the same thing for her child. Just because fans saw Jenner grow up on Keeping Up With The Kardashians doesn't mean that they're going to get the same level of access to her baby. Sure, she clearly loves the spotlight for herself, but she could have someone else's well-being to consider now, and it appears that she's taking some time to do just that, should these rumors be true.

Of course, that didn't stop commenters from flooding her throwback Instagram post with comments like "SHOW THE BABY" and "where's the bump?" But just because someone has bought Kylie Cosmetics doesn't mean that they've bought the right to see her bump before she's ready.

Maybe Jenner will post a bump picture tomorrow. Maybe she won't. Either way, it's her decision, and fans have got to let her make it on her own time.