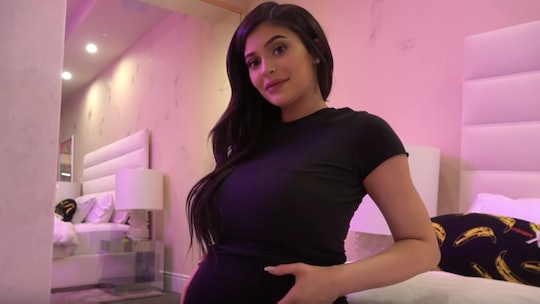 Of the many reasons why the world can't get enough of the Kardashian-Jenner clan, their over-the-top approach to just about every holiday is my personal favorite characteristic of the famous family. Mixed in with the numerous costumes on display on Wednesday, Kylie Jenner's throwback pregnancy pics from last Halloween are proof that nothing gets in the way of their festivities. As her pregnancy was technically being kept under wraps at this time last year, this is the first opportunity that the makeup mogul has given the world to see her full angelic look from the night.

As Halloween night progressed, Jenner posted not one, not two, but six unique costumes to her Instagram page, according to BuzzFeed. Her costumes this year included two mommy-and-me costumes with baby Stormi — a pair of beautiful butterflies and a literal storm — as well as a couple of Barbie costumes, complete with a matching pink sports car, a Victoria's Secret Angel get-up, and a yellow Fanta girl.

But perhaps the most exciting post of all of her Halloween pics didn't come from this year's lengthy list of costumes. In her Instagram Story, she posted a few throwback shots of her outfit from 2017. Last year, while she was still pregnant, Jenner dressed up as an angel in all white.

Prior to sharing her throwback photos, Jenner referenced them in a video Story. "I know I have a lot of costumes going on this year but I’m not finished," she said. "I have just one more. One more, I promise." The next clip showed her in a sparkly white dress and large, feathered white wings. The photos also included a date, Oct. 29, 2017, which means they were taken a little over three months before Stormi was born. "Throwback to last year, cooking Stormi," she captioned one of the photos.

If you had internet connection for even a short time during late 2017 or early 2018, you likely remember the persistent rumors of Jenner's pregnancy. The rumors began circulating as early as September 2017, but Jenner and her family refrained from officially confirming the news until February, after Stormi was born, according to Seventeen.

Part of her plan to hide her pregnancy included taking a bit of a social media hiatus, and strategically limiting what she did share. In her consistent efforts to keep her pregnancy private, Jenner even opted out of the annual Kardashian-Jenner family Christmas card photo shoot, as Cosmopolitan reported. So it is no surprise that she didn't share her full Halloween costume that year. Fortunately for her fans, that doesn't mean that she didn't take plenty of photos and videos to share a year later.

Along with her throwback photos of last year's angel costume, Jenner also posted a few sexy snaps of her 2018 angelic outfit à la Victoria's Secret. This second heaven-send of a costume was a joint effort along with her four sisters, all of whom donned Angel lingerie that came straight off the runway. According to People, Victoria's Secret loaned the outfits to the girls, along with authentic Angel wings.

In the months following her big announcement about Stormi's birth, Jenner has slowly shared more and more photos of her pregnancy journey and the Halloween pics are just the latest. With Thanksgiving, Christmas, and New Year's Eve right around the corner, perhaps fans can look forward to even more festive throwback pics from Jenner. Personally, I'd love to see what she was up to while her family was posing for the series of photos that went on to make up their Christmas card.

More Like This
Julia Roberts Shared A Rare Photo Of Her Twins Hazel & Finn On Their 18th Birthday
Lizzo's Mom Gushes About Her Daughter As A “Champion Of Others” Who “Builds You Up”
Aww! 2-Year-Old Archie Is "Very Happy" To Be A Big Brother
'Harry & Meghan' Shares Never-Before-Seen Photos Of Archie & Lilibet