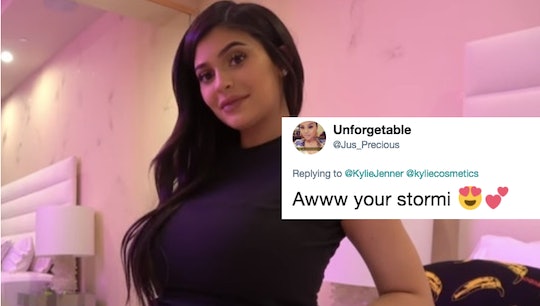 For the last couple weeks, people have been watching Kylie Jenner's every move as a new mom and now she's dazzled her fans once again. This time, Kylie Jenner's tribute to baby Stormi is so sweet that it has Twitter totally melting into a puddle of "awwww." And, not only is her tribute for her daughter, Jenner has also made it for her loyal cosmetics lovers. That's right! Jenner is dropping a new collection for Kylie Cosmetics and it's called the Weather Collection.

The collection is made up of lipsticks, eye makeup palettes, glitter gloss, highlighting powder and more. Some of the items you can purchase include the Calm Before the Storm Palette, the Eye of the Storm Palette, Nightfall Matte Lipstick, and Flash Glitter Gloss. According to the official Kylie Cosmetics Instagram page, the Weather Collection is set to launch Feb. 28, 2018 at 6 p.m. ET/3 p.m. PT.

How cute is it for Jenner to dedicate an entire cosmetics collection to her daughter? And how genius is it? Raise your hand if you think that this collection will probably sell out right away on her website. The Kardashians and Jenners definitely deserve a medal when it comes to business strategy. And, according to Us Weekly, Jenner is also quite the dedicated mother. Juggling motherhood and a multi-million dollar empire at just 20 years old. How amazing is that?!

Stormi isn't the first family member who Jenner has dedicated her cosmetics to. She's incorporated her grandmother and some of her sisters as well since the cosmetics company's initial launch in 2015. For example, there's the Koko Collection under Kylie Cosmetics and that is in collaboration with her sister Khloe Kardashian, whose nickname is Koko. There's also the Penelope Lip Kit and the Mary Jo K Lip Kit. Jenner's niece is Penelope and her grandmother is MJ, a.k.a. Mary Jo.

Us Weekly has reported that Kylie Jenner has been loving life at home with her newborn and clearly this is reflected in her new cosmetics line.

For months, Jenner disappeared from the spotlight and fans were in the dark about her having a baby. Once Stormi was born, Jenner announced the news in a YouTube video titled "To Our Daughter". In addition to the video, Jenner posted messages to fans on her Instagram account, writing, "Pregnancy has been the most beautiful, empowering, and life-changing experience I've had in my entire life and I'm actually going to miss it." She went on to explain to her fans why she decided to keep her baby news private, writing to her followers that:

I understand you’re used to me bringing you along on all my journeys. My pregnancy was one I chose not to do in front of the world. I knew for myself I needed to prepare for this role of a lifetime in the most positive, stress free, and healthy way I knew how.

Of course, it's completely understandable that Jenner would want a stress-free pregnancy. Isn't that ideal for every expectant mother?

So far, Jenner has revealed the name of her daughter and a new cosmetics line dedicated to her little one. What's next? Fans definitely cannot wait to see a full-faced photo of Stormi, though Jenner recently said Stormi looks just like she did when she was a baby, according to Harpers Bazaar.

The only photo that Jenner has released of baby Stormi so far is a close-up of her tiny hand. Stormi's mouth and part of her nose are seen in the background of the pic, but fans have still not seen her entire face. Until Jenner lets fans get a peek at little Stormi, they'll just have to settle for some super cute makeup in Stormi's name.