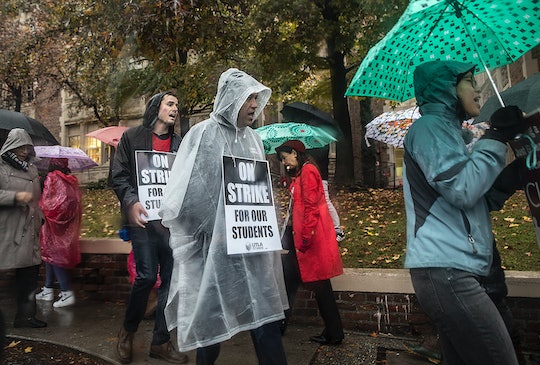 L.A. Teachers Are On Strike, Affecting About A Half A Million Families

Amid a rare Southern California downpour, teachers stepped away from their chalkboards Monday morning and gathered up their picketing signs. L.A. teachers have gone on strike for the first time in 30 years, affecting over 500,000 students and their families.

The strike, which kicked in the morning of Monday, Jan. 14, was expected by the weekend, as negotiations between the Los Angeles Unified School District and the teachers union did not progress, according to the Los Angeles Times.

The teachers are asking for smaller class sizes in a school system that can have 40 or more kids per classroom, the Los Angeles Times added. The teachers also want more support staff, such as nurses and librarians, at the city's packed educational institutions and better pay, per the L.A. Times.

Celebrities including Busy Phillips, Marlee Matlin, and Andy Richter have weighed in on Twitter and Instagram in support of teachers' demands at the second-largest school system in the country, which include a 6.5 percent raise going back a year, according to USA Today. The paper added the school district offered a 6 percent raise to instructors by the second year of a new, three-year contract — but without the retroactive clause.

The previous contract between union and school district bosses expired in 2017, added the Los Angeles Times... meaning this showdown has been brewing for quite a while.

And while it sounds like the two camps aren't that far apart on salary figures, there are huge divisions behind the scenes between the school district, represented by Superintendent Austin Beutner, and UTLA, headed by Alex Caputo-Pearl, per the Los Angeles Times.

The teachers say there's $2 million budget surplus that allows LAUSD to fund their raise, plus smaller class ratios and more support staff, as the L.A. Times noted. Meanwhile, LAUSD says if it does all this, the district will go bankrupt, as the surplus is already spoken for to manage other expenses, USA Today noted.

Adding to the volatile mix is what appears to be a personal dispute between the teachers and the district, as the L.A. Times reported, and an atmosphere of distrust, and even name-calling, between those representing teachers on the front lines and administrators who work removed from the daily issues, as NBC 4 Los Angeles noted.

The two sides have previously squared off regarding charters schools, which the union feels have removed resources from neighborhood schools, NBC 4 added, and teachers' retirement pensions and health insurance for retirees, the L.A. Times added.

Meanwhile, some 500,000 families, as per USA Today, are in unchartered waters with their daily childcare situations. The schools have pledged to remain open, but it's not clear how many students are actually attending school or what kind of learning might be happening when they get there.

Because it's unclear what kind of teaching can even take place — if any — many parents are opting to keep children at home as a safer bet in case there are supervision issues and non-union subs, according to LAist.com.

Additionally, some parents decided to demonstrate with their kids as a teaching tool, as CBS Los Angeles reported. During the last teacher's strike three decades ago, about half the students went to school, the L.A. Times noted.

With the real problem being national funding for public education, observers and Los Angeles parents wonder where it will all end. California's brand-new governor, Gavin Newsom, has proposed a $209 billion budget for schools, and has said he will get involved in negotiations if needed, according to NBC 4 Los Angeles.

USA Today noted that other overburdened teachers are looking closely at the current strike, including those in Oakland, California. Teachers from West Virginia to Washington state have recently demonstrated, the newspaper added.

As HuffPost noted, the irony is, California is a wealthy state, with USA Today recently proclaiming it the fifth largest economy in the world. However, as website Politfact noted, California is roughly 41st in the U.S. in per-student funding. As the Center on Budget Policy and Priorities noted, the last decade has seen a sharp decline in the investment in public education in many states, not just the Golden State.

As a mom in the middle in Los Angeles, I don't blame any one person or entity. The real question is: Why do we not push harder to generously fund the most important things of all... our kids, and our country's future?