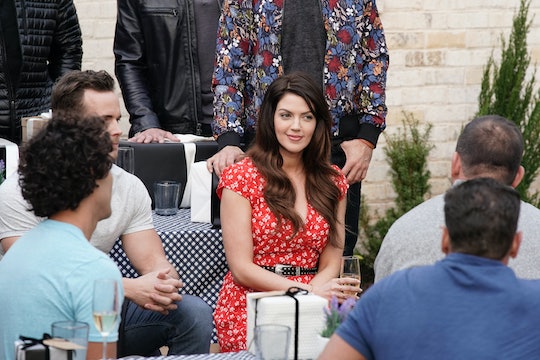 A new reality dating show to obsess over has officially aired on FOX with a premise that'll certainly pique your interest. Hosted by Sex and the City's Kristen Davis, Labor Of Love aired on May 21 and will follow one former contestant from The Bachelor looking for love, marriage, and, well, putting a baby in the baby carriage.

In addition to Davis, Labor Of Love stars Kristy Katzmann, who appeared on Brad Womack's first season of The Bachelor in 2007, looking for a partner and potential father of her future children. "I, of course, never thought I would be 41 and single," Katzmann says in the trailer. Enter 15 "daddy wannabes" who are looking to win Katzmann's heart and are ready to start a family right now. "Alright, let's have some kids," one eligible bachelor says.

Over the course of the show, the men will partake in challenges — like changing diapers and going through a labor simulator — to "put their parenting skills to the test" and prove if they're a natural with kids. Each week, Katzmann will narrow down the pool of potential fathers to determine if she has found the person she would like to settle down with or "continue on the path to motherhood on her own."

Davis, who is a mom to two adopted children, serves as Katzmann's guide. Davis said in the premiere episode on Thursday that she found herself in Katzmann’s shoes a few years ago. "Because I worked my entire 30s, I really searched for years trying to find the best way for me to be able to become a mother," she said. "And for me, the answer was adoption, and I have two beautiful children now, and I really believe it was meant to be."

Katzmann, who is also a blogger for the website the Modern Mamanista, describes herself as an "aunt extraordinaire" with hopes of starting a family of her own one day and promised in an Instagram post that viewers will be very entertained by the reality series. "I hope you see a little bit of yourself in me and that you feel inspired to take big chances in your own life and to never give up on your biggest dreams...no matter what," she wrote.

You can watch Labor Of Love every Thursday on FOX at 9 p.m. EST or on Hulu the next day. The premiere episode is already on Hulu and on FOX Now.

This article was originally published on April 16, 2020