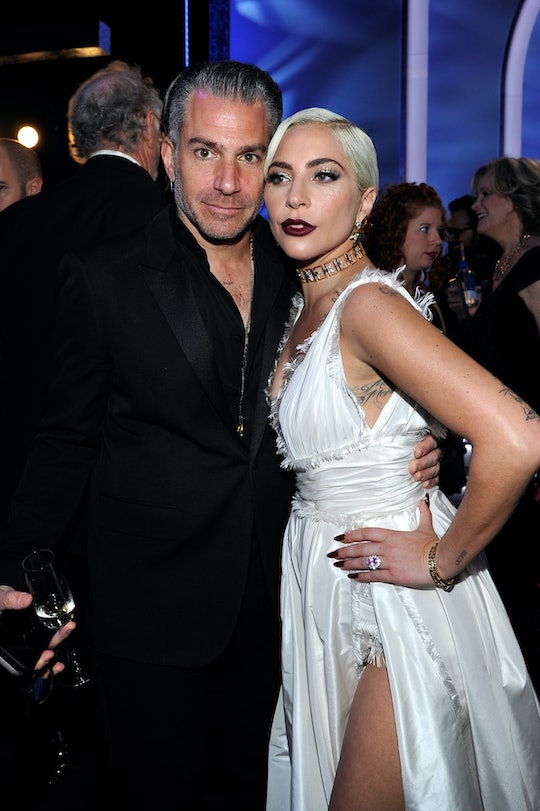 It looks like Hollywood is in the midst of another difficult breakup. As for the latest couple to split, Lady Gaga and Christian Cirano have ended their engagement, the singer's representative confirmed to People on Tuesday, Feb 19. (The singer's rep did not immediately respond to Romper’s request for comment.)The sad news comes just days before Lady Gaga is set to perform at the Oscars on Sunday, Feb. 24.

It's not clear at this time what caused the couple to part ways, but a supposed insider provided some insight, telling People: “It just didn’t work out. Relationships sometimes end. “There’s no long dramatic story.” Fair enough, right? Sometimes things just aren't meant to be.

Speculation regarding the status of Lady Gaga and Cirano's engagement kicked off on Sunday, Feb. 10 after the actress was spotted at the event sans engagement ring, according to E! News. An insider, however, blamed the missing accessory on her performance.

“She just wasn’t wearing her ring due to performing,” the source told E! News. “They have put all their wedding plans on hold until after Gaga’s busy season, but still plan to get married this year.”

Making matters even more curious? Lady Gaga didn't mention Cirano during her acceptance speech at the Grammys, according to Mercury News.

As the old saying goes, where there's smoke there's fire, and it looks like fans were right about this breakup. The whole thing is pretty sad, especially when you consider how happy they seemed together.

"When I went backstage, Christian was by the stairs making sure I was OK," Lady Gaga said about her beau in September 2017 during a concert, according to the Daily Mail. "The best part about being in love with someone is having them there to catch you if you fall."

Carino also gushed about his former lady love in an Instagram post after the Golden Globes in January 2019, writing: "I like this one. congratulations, beautiful girl."

But amid all of the love and sweet comments, there were some signs that the relationship wasn't on steady ground. Case in point: The two hadn't set a wedding date yet, despite getting engaged in October 2018, according to Us Weekly. Although it's completely normal for busy couples to put things off, it's fair to wonder what was going on behind-the-scenes here.

Sources, however, consistently maintained that Lady Gaga was eager to marry Carino. "Gaga is so over the moon at the moment," an insider said in December 2018 about Lady Gaga's outlook on life, according to the Daily Mail. "She is constantly telling those close to her how grateful she is to be at this point in her life and work with such incredible artists and be with the man she loves so dearly." The source added: "Gaga is incredibly elated about her engagement, but because of how busy she's been with [A Star Is Born], she can't even begin to think about a wedding."

It's unfortunate to see this reported split unfold, but as long as both parties are happy and OK, that's all that matters. And on the bright side, Lady Gaga has a lot to celebrate this upcoming Sunday at the Oscars.