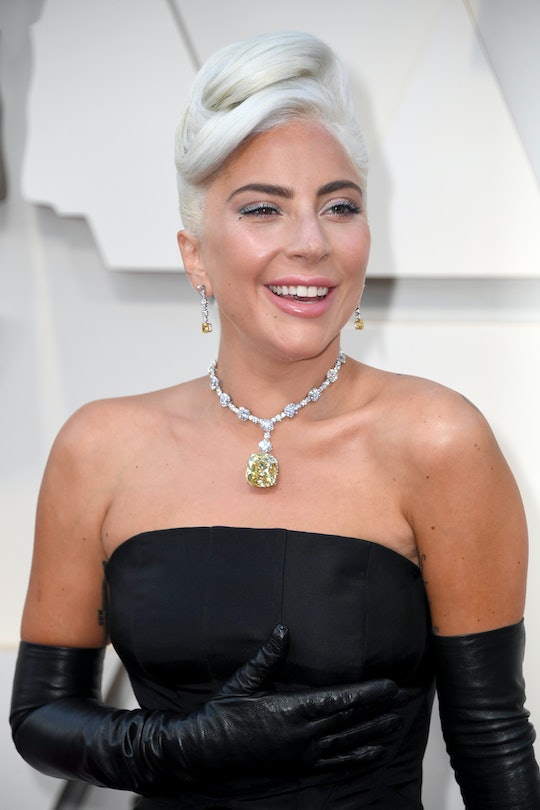 When it comes to red carpet fashion, Lady Gaga never disappoints. From her infamous meat dress to her Judy Garland throwback at the Golden Globes, the rock star/actress is always turning heads. But at this year's Academy Awards, she took a page from one of the biggest fashion icons in Hollywood. According to InStyle, Lady Gaga paid tribute to Audrey Hepburn at the Oscars when she wore the same iconic diamond the legendary actress wore years ago.

The singer-turned-Hollywood sensation — who was nominated for Best Actress for her role in A Star Is Born — wore her hair up, with a striking strapless black Alexander McQueen dress, long black leather gloves, and the 128.54-carat yellow Tiffany Diamond, according to E! News.

According to Tiffany & Co., the diamond was first discovered as a 287.42-carat stone in the Kimberley diamond mines of South Africa in 1877. Tiffany & Co. founder, Charles Lewis Tiffany, acquired the stone in 1878, and then sent it to Paris where it was cut into a cushion-shape brilliant with 82 facets.

The stone was first worn in 1957 by Mrs. Sheldon Whitehouse at the Tiffany Ball held in Newport, Rhode Island, according to W Magazine. It was then famously worn by Hepburn in 1961, as she was photographed for promotions for Breakfast at Tiffany's. Since then, the diamond has been exhibited around the world, but this is the first time it's been worn since 1961.

The stone is worth nearly $30 million dollars today, according to Harper's Bazaar, and when it was put up for sale in 1972 through a New York Times ad for $5 million, no one offered to buy it. At the time, Tiffany believed that no buyers were interested because either they couldn't afford it, or no one believed it was for real.

The Tiffany Diamond has never been worn to an awards show until now, and I can't think of a neck more deserving than Lady Gaga's. She's an icon on every level. From fashion to music, from activism to acting, she's a boss at everything she does. This year she is nominated for two Academy Awards — Best Actress and Best Original Song — both for her film A Star Is Born, in which she plays Ally, a struggling artist who is discovered by a seasoned musician, Jackson (Bradley Cooper).

For Gaga, the Oscar nominations were a dream come true. In an interview with The New York Times, she said she was thrilled to be recognized for her work on A Star Is Born. “To be recognized as the lead actress and a musician at the same time, I can’t tell you what that means to me,” Gaga told the publication. "I come from an Italian-immigrant family, and this feels like a very big win for them. This film was a lot of hard work, and I wouldn’t know that hard work if I didn’t know the hard work of the lineage of my family.”

With two nominations and her iconic look, the 2019 Oscars have already proven to be an all around win for Lady Gaga.