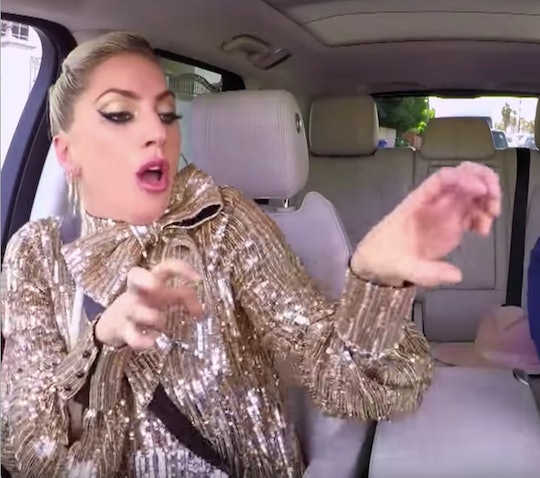 Lady Gaga took shotgun in James Corden's modern day Chitty Chitty Bang Bang. Many greats have taken the enviable seat, but this time it was Gaga, who just released Joanne, who "helped Corden get to work." The best moments from Lady Gaga's Carpool Karaoke with James Corden prove this could be one of the best yet. The duo sang and danced to a string of Lady Gaga songs during the car ride, among a few other songs, one being "Liquid Dreams" by O-Town. Gaga even took the driver's seat, and realized that her many talents don't extend to the road. As she drove, Corden confessed "I just don't know if I feel safe in this environment" as he reached for a helmet. It doesn't take long for Corden to kick her out of the driver's seat. Then, towards the end of the sketch, Corden playfully mimics some of Gaga's eye-opening outfits in a montage.

In the video, Gaga wears a sequined gold blouse with a bow on it, hoops, and gold eyeshadow — relatively toned-down for the outfits Corden wears in homage to her past fashions. During the car ride, she teaches Corden how to "Poker Face," and a thing or two about the "Bad Romance" lyrics. Read on for the hilarious highlights from the "Perfect Illusion" singer's ride.

1.When Lady Gaga Told Traffic Off

She even broke out into Ludacris' "Move B*tch."

2. When She Reenacted Her Superbowl Offer

3. When She Sang That Epic Line

I could listen to Gaga scream "Cuz I'm a free b*tch, baby" from "Bad Romance" over and over.

4. When Corden Became A Little Monster

Put your paws up!

5. When Corden Taught Gaga To Drive

6. When Gaga Sped Off

7. In Doing So, Traumatizing Corden

8. When Gaga Flips Corden Off

Corden asked her "have you learned the hand signals to drive in New York yet?" And she responds with "Yeah, this one" and raises her middle finger.

9. When Corden Grabbed A Helmet

11. When James Corden Went All Lace

It's definitely a look.

13. When Corden Ate His Meat Dress

"You've always got a snack." At least these were deli meats, and not raw steaks.

Gaga shines in this carpool karaoke, and I'm already screaming for more from these two!