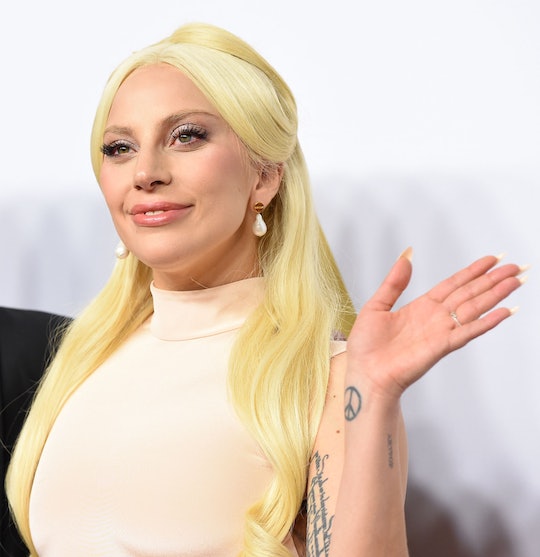 Ahead of the 58th Annual Grammy Awards on Monday night, Lady Gaga revealed a David Bowie tattoo that she had done on Saturday night. The iconic pop star showed off her new ink via her new Snapchat account. In early February, CBS announced that Lady Gaga would perform "an experimental tribute" to Bowie, the British rock star and actor who died of cancer on Jan. 10. Ken Ehrlich, executive producer for this year's Grammys, said in the announcement:

We had already booked Lady Gaga on this year's show, but when David passed – almost in a single moment — we knew we had to change direction. We immediately spoke and agreed that she should be the one to honor David. She’s perfect for it.

Lady Gaga, a six-time Grammy winner, got her Bowie tribute tattoo at the Shamrock Social Club on Sunset Boulevard in West Hollywood, California. She was inked by famed American tattoo artist Mark Mahoney, most notable for his work in black and gray with a single needle. Lady Gaga's latest tattoo was no exception — featuring a stunning black and gray rendition of the classic portrait of Bowie as alter-ego Ziggy Stardust on the left side of her torso.

Lady Gaga has cited Bowie as a major influence in her work, not just as a musician, but as a larger-than-life artist and fashion icon. In a Jan. 8 podcast with The Hollywood Reporter, she told host Scott Feinberg: "When I fell in love with David Bowie, when I was living on the Lower East Side, I always felt that his glamor was something he was using to express a message to people that was very healing for their souls." Bowie died of liver cancer just two days later. Gaga captioned one of her Snapchat photos of her Ziggy Stardust tattoo with: "this was the image that changed my life."

Gaga was nominated for a Grammy Award for Best Song Written for Visual Media for “Til It Happens To You.” The song was produced in collaboration with songwriter Diane Warren for the documentary, The Hunting Ground — a documentary about alleged rape and sexual assaults on college campuses — that premiered at the 2015 Sundance Film Festival. In the January podcast with The Hollywood Reporter, Gaga spoke of her own alleged rape when she was just 19 years old and a budding star in the music industry. "Til It Happens To You" has also been nominated for an Oscar for Best Original Song.

Gaga's tribute to Bowie will be a "multi-sensory testament to the superstar's incredible artistry and a reflection of his limitless creativity." Fans will have to wait and see until Monday night if her performance will include showing off her fresh ink.